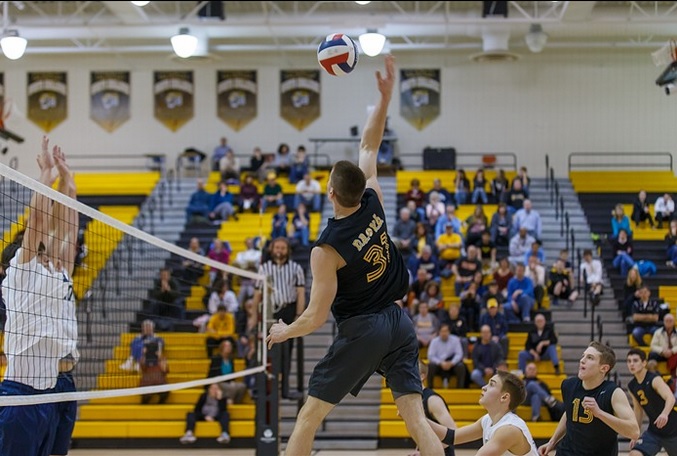 The North Allegheny Boys Volleyball Team opened section play on Tuesday night with a 3-0 victory over the Shaler Titans. The Tigers triumphed over the Titans by set scores of 25-20, 25-19 and 25-20.

Coming off a 1-11 record in Section 2-AAA last season, the Shaler Titans were hoping to put behind them their recent struggles behind the strength of four three-year starters.  Shaler’s senior setter Steve Jordan and senior OH Sam Maszkiewicz both played for the Pittsburgh Volleyball Club in the winter, a team that was coached by NA’s Dan Schall.  Jordan and Maszkiewicz did their best to keep the Titans on pace with the Tigers in each set, but NA’s senior trio was too much for Shaler to handle.

Haus helped the Tigers to victory in set one with five kills and an ace, and senior Brendan Brown added seven digs, two kills and a block. Brown finished the night with nine digs, six kills and three blocks.

In sets two and three, Higgins asserted his dominance by whistling kill after kill over, around, and through the Shaler defense. With a highlight reel performance, Higgins was named the Wright Automotive Player of the Match.

North Allegheny improves to 1-0 overall and in Section 2-AAA.  Shaler falls to 1-1 overall and 0-1 in section play. The reigning PIAA champions return to action on Thursday night with a visit to Pine-Richland on tap.  Start time is slated for 7:00 pm.