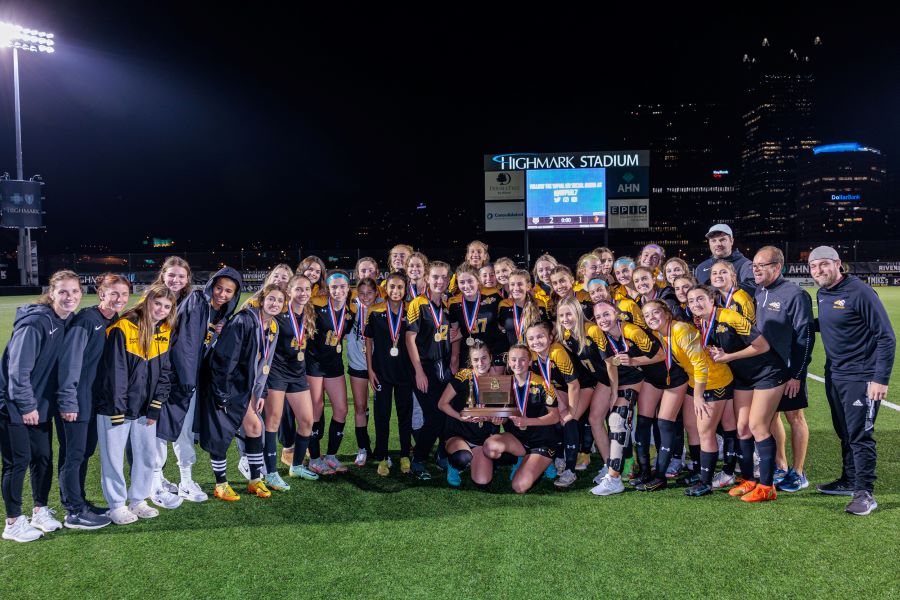 The North Allegheny girls’ soccer team won the WPIAL Class 4A championship for the third time in the last four seasons with a thrilling 2-1 win in a double overtime, penalty kick shootout at Highmark Stadium in Pittsburgh. The Tigers outscored the Indians 3-2 in penalty kicks and senior Riley Cerqua what proved to be the game-winning goal in the shootout. It’s the third straight postseason win over Peters Township, including a 2-1 triumph that was determined by penalty kicks in the 2019 WPIAL semifinals.

The top-seeded Tigers and the third-seeded Indians traded punches in a scoreless first half. In a defensive-minded game for much of the night, Peters Township scored the first goal of the night in the 47th minute. Senior Bliss Plummer’s shot from the left flank was saved by North Allegheny keeper Natalie Rak, who then stonewalled senior Bella Spergel on back-to-back rebound attempts. However, a third rebound for the persistent Spergel found the back of the net and the Indians grabbed a 1-0 lead. The goal was Spergel’s 12th of the year. 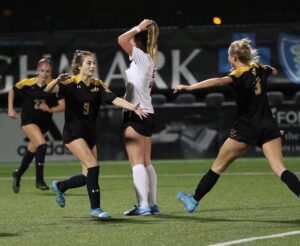 The Peters Township lead was short-lived, however, as North Allegheny senior Lucia Wells tied the game 24 seconds later on a feed from fellow senior Anna Bundy and the game was tied 1-1. The goal was Well’s team-leading 28th of the season.

Despite the quick flurry of goals in the 47th minute, the rest of the contest remained deadlocked all the way through double overtime. Sophomore defenseman Eliana Vitale made two terrific defensive plays in the extra session, including a wheel kick on a clearing effort in front of the net five minutes into the first overtime. Vitale made a defensive save in the second overtime to prevent the Indians from winning the contest. Junior Abigail Stager had the best scoring chances in overtime with two shots on net, but freshman keeper Molly Kubistek performed valiantly for Peters Township and made seven saves.

With the game still tied after two overtime periods, a penalty kick shootout was necessitated to decide a victor. Wells scored on the first kick for NA, but was immediately answered by Spergel to even the shootout at 1-1. Senior Sophia Palermo gave the Tigers the edge back with a goal and Ella Neupaver missed on the next opportunity for the Indians, giving NA a 2-1 advantage. Neither team scored on their next shot, but in the fourth round of penalty kicks Cerqua delivered to give the Tigers a 3-1 lead. Christina Sefer answered back for the Indians, cutting the shootout score to 3-2 with one more round remaining. NA didn’t convert on its final shot opportunity, leaving the game resting on the toe of Lexi Pirosko. The All-WPIAL defenseman missed the net on her shot attempt and the Tigers prevailed by a final score of 2-1 (3-2 in PK’s).

Rak earned the win for North Allegheny with six saves on the night. Palermo, who scored in the PK’s, was rock solid in the midfield throughout the game and earned Wright Automotive Player of the Game honors.

With a 10th consecutive win, North Allegheny improves to 20-1 on the season and advances to the PIAA playoffs. Peters Township dips to 14-2-3 on the year and will also enter the PIAA playoffs on Tuesday as the WPIAL runners-up.