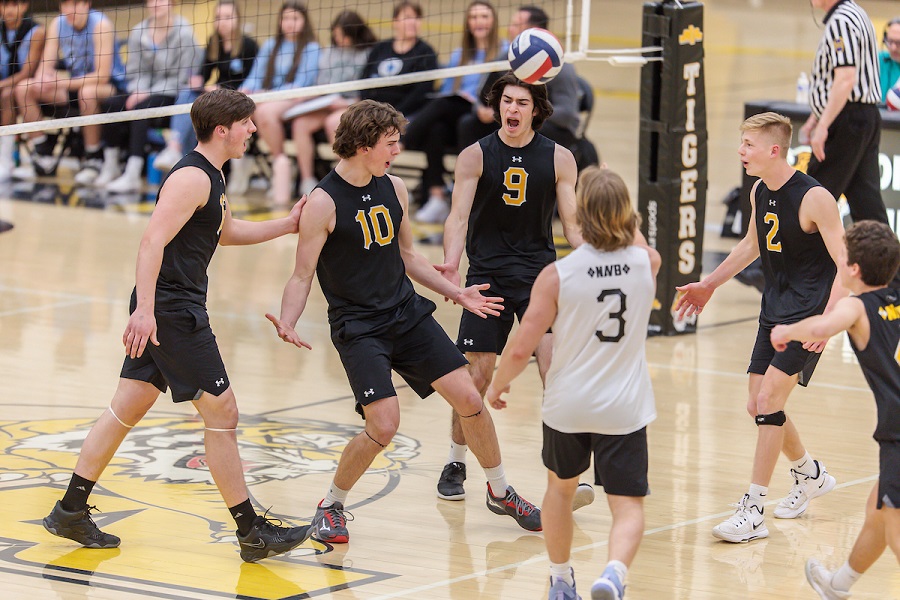 The North Allegheny Volleyball program bested Shaler Tuesday night at UPMC Court 3-1 in section action. The win keeps the Tigers undefeated in section and match play so far this season. NA has won 73 in a row.

NA took an early lead in the first set, as Jack Birch and Zach Brkovich launched back-to-back kills to open the scoring. Birch worked well with Caleb Schall and Jax Wilhite to keep the Titans at bay as the Tigers took set one, 25-16.

The second set was back and forth early, as Birch added a couple of more kills in the opening sequence, along with strong play from Wilhite and Ben Huet to keep North Allegheny’s lead steady. Two Ryan Treser aces and a Schall ace secured the win in the frame two.

Set three was a tough battle early and the score was tied up at eight apiece before Shaler got the best of the play down the stretch. Dom Rossi led the way for the Titans with three kills in the set, Ian Weber added three kills and a block to secure the set for Shaler, 25-23.

Birch and Wilhite had some help from an emerging Varun Kaveti off the bench to take the match in the fourth set. Kaveti had five kills in the final frame, while Birch added five himself including the match-clinching hit as NA took set four, 25-17.

Birch earned Wright Automotive Player of the Game honors with 16 kills, four blocks and an ace on the night. Wilhite ended the game with 10 kills and a block. Kaveti had eight total kills despite only playing in the final two sets.

With the win, North Allegheny improves their overall and section record to 8-0. The team will be back in action Saturday morning taking part in the State College Invitational.