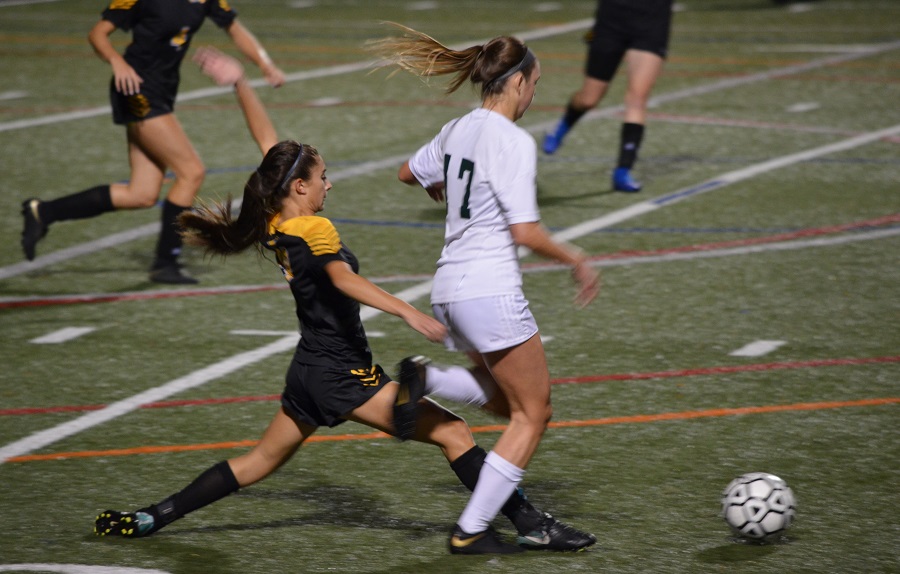 The fourth-ranked North Allegheny girls’ soccer team dropped a 3-0 decision to the Pine-Richland Rams on Wednesday night. It was the sixth win in a row for PR and marked the 300th career win for Rams head coach Jodi Chmielewski.

The first time these teams met in the section opener on September 5, North Allegheny got off to a quick start and ultimately claimed a 3-2 win at Pine-Richland in double overtime. In the rematch at Newman Stadium, it was the Rams who jumped out of the gates with a goal by Megan Donnelly for a 1-0 lead with 32:25 to play in the first half.

While Pine-Richland struck first, the Tigers eventually settled in and almost tied the game with 25 minutes left in the half when senior Alex Adams stole the ball and uncorked a shot the clanged off the crossbar. The near-miss kept the Rams in front, 1-0.

The Rams nearly extended the lead with 17:20 on the clock as Donnelly charged in again but was denied on a terrific open field play by defenseman Riley Miara, keeping the deficit at one goal for the Tigers.

North Allegheny continued to pressure and had two solid scoring chances late in the half. Junior Ava Ruppersberger narrowly missed wide right with 6:50 on the clock. Less than a minute later, junior Emma Bundy arched a ball in front of the net to Hannah Kirkpatrick who belted a strong shot from 10-yards out. However, Pine-Richland goalie Katherine Kelly made a diving stop to thwart the Tigers and the score remained 1-0, Rams, by intermission.

In the opening minutes of the second half, Pine-Richland added on to its lead thanks to a goal by Allie Malobicky for a 2-0 advantage.

North Allegheny sophomore Sarah Schupansky provided an offense spark and had two good scoring chances in the second half. For her efforts, Schupansky was named the Wright Automotive Player of the Game by the North Allegheny Sports Network.

Despite valiant play from Schupansky and the Tigers, Pine-Richland put the finishing touches on the night with one more goal by Malobicky with 1:55 to play to bring the score to its ultimate final, 3-0.

Following Wednesday night’s game, North Allegheny sits at 6-3 overall and 5-2 in Section 1-AAAA. Pine-Richland improves to 9-2 overall and 5-2 in the section. The Lady Tigers look to bounce back on Saturday with a home date against section rival Seneca Valley.