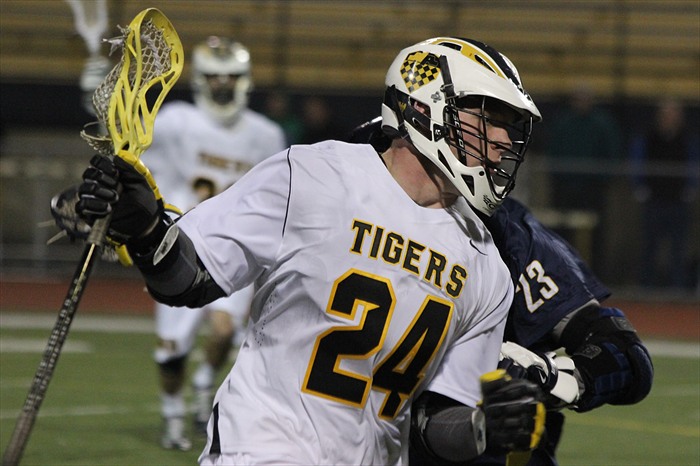 North Allegheny exploded for six goals in the third quarter to turn a close game into a rout, defeating the Fox Chapel Foxes on Friday night by a 15-6 decision.  Coming off their first playoff appearance in program history last season, the experience-laden Foxes were hoping to come to North Allegheny and upset the top-ranked Tigers.  However, North Allegheny’s physical play was too much for their section foe and the Tigers wore down the Foxes with a big second half.

North Allegheny opened the game with a man-up goal by Gavin Hagen just 1:10 in for a 1-0 lead.  With eight minutes to play in the period, Teddy Ednaczyk scored the first of his four goals on the night for a 2-0 Tigers lead. Fox Chapel was outplayed in the early going but finally found its rhythm later in the period and scored two goals in a span of 14 seconds to tie the game.  Matt Hardiman netted a goal with 3:51 remaining in the first and Levi McCrady, the son of Fox Chapel coach Chris McCrady, scored a man-up goal just moments later to knot the score at 2-2.

In one of two pivotal moments in the game, the Foxes seemed poised to take the lead when Andy Ream came open in front of the NA net but Tigers goalie Will Rahenkamp made a spectacular save to keep the game tied.  Just seconds later, the North Allegheny rush created a scoring chance of its own and Ednaczyk cashed in to put the Tigers ahead, 3-2, with 1:30 left in the opening stanza.  North Allegheny would not relinquish the lead from that point on.

Zech Nachazel and Wes Powell netted markers in the second period to give the Tigers a 5-2 lead at halftime, but Fox Chapel quickly answered at the beginning of the third period with a goal by Tucker Root to trim the score to 5-3, NA.  The host Tigers responded unkind to Root’s goal with six unanswered goals in the third period for a commanding 11-3 advantage.

In the third period avalanche, the field was heavily titled in North Allegheny’s favor as the Foxes managed just three shots on net. Much of that time of possession came courtesy of senior Zach Smith who won 15 of 16 faceoffs in the second half.  Smith led the Tigers in ground balls with 11 and his brute force took over the game, earning him Wright Automotive Player of the Game honors.

In the dominating third period, North Allegheny received two goals from Smith, two from Ednaczyk, and one apiece from Hagen and Nachazel. From that point on, the Tigers had a strangle hold of the game and coasted to the victory in the fourth quarter.  Other goal scorers for NA in the fourth period included Jacob Zemet, Nate Sprunk and Alec Vissotski.  For Fox Chapel, Root paced the visitor’s attack with a hat trick.

North Allegheny’s defense smothered the Foxes throughout the game and forced 21 errors on the night.  Sophomore Greg Ferringer notched a team-high five forced errors and corralled nine ground balls.  The Tigers picked up 40 ground balls to just 20 for Fox Chapel.

With the win, NA improves to 10-1 overall and 5-0 in Division 1, Section 2, locking up at least a share of the section crown.  Fox Chapel drops to 6-3 overall and 2-2 in section play. The Tigers visit Upper St. Clair on Wednesday night in their next contest. Opening faceoff is slated for 8:00.