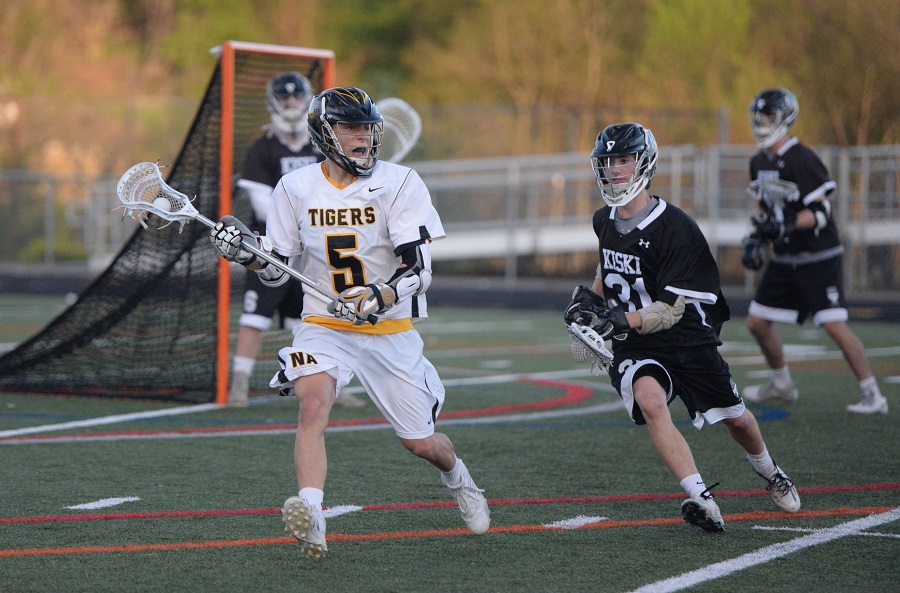 The North Allegheny Tigers went head-to-head with lacrosse power Kiski Prep and dropped a narrow 6-5 decision on Wednesday night at Newman Stadium. The Tigers fought back from a 4-1 deficit to tie the game twice before Kiski’s Matthew Degirolamo netted what proved to be the game winner with 37 seconds remaining in third quarter. The outcome snaps an eight-game winning streak for the Tigers.

Trailing 4-1 at the half, the Tigers roared back in the third quarter on goals by Matt Osten, Wes Powell and Dillon Dugan to tie the game at 4-4 with 4:29 remaining in the period. Kiski senior Quinn Commandant gave the Cougars the lead back with a marker with 2:07 remaining in the third, but NA answered immediately thanks to another quick goal by Dugan 24 seconds later and the score was tied, 5-5. That set the stage for Degirolamo’s goal before the end of the third period that brought the game to its eventual final, 6-5, Kiski Prep.  NA’s lone goal in the first half belonged to Ben Maenza.

Following the loss, North Allegheny’s record sits at 8-2 overall and Kiski Prep improves to 9-5 on the season. The Tigers will play host to a tough Mars team tonight at 7:30 p.m.