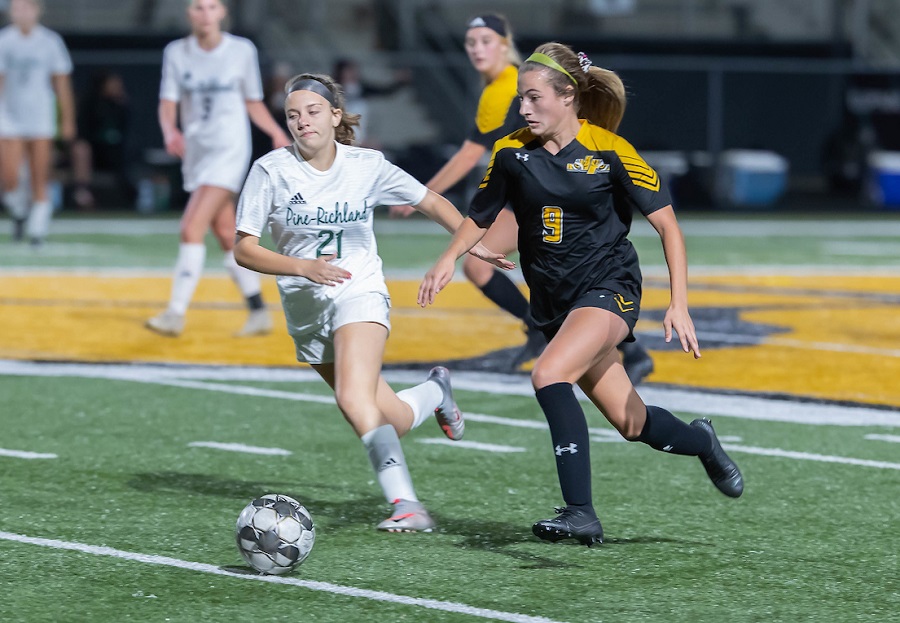 A second half outburst by North Allegheny broke open a tight game and turned it into a 4-2 win over Seneca Valley on Thursday night at Newman Stadium.

In the early going, the visiting Raiders jumped ahead as junior forward Zoe Simpson scored less than three minutes into the game for a 1-0 lead. Despite the immediate deficit, the Tigers owned time of possession and peppered SV goalie Virginia Fronk with numerous shots on net. For the game, NA outshot Seneca Valley, 16-6.

It appeared North Allegheny had tied the game with 18 minutes left in the first half when sophomore Abigail Stager pushed a rebound into the back of the net but the goal was disallowed. After surviving the threat by Stager, the Raiders clung to their one-goal lead through intermission.

The physicality in the contest increased significantly in the second half, which led to some timely opportunities for North Allegheny on free kicks. Five minutes into the second half, a Seneca Valley foul gave NA a free kick just outside the goal box near the right corner. Senior Sarah Schupansky’s free kick struck the crossbar and caromed to sophomore Lucia Wells, who put a shot on net that was saved by Fronk. However, the rebound came free to senior Tulasi Syamala who buried the open chance and the game was tied, 1-1.

The game remained deadlocked until another Seneca Valley foul led to a free kick for NA from nearly 50 yards out. Schupansky’s strong leg powered the ball into the goal box where it squirted through the body of Fronk and loose in front of the net. With a yawning net in front of her, Wells tapped in the easy goal for a 2-1 lead with 15:48 remaining in regulation.

Having played much of the second half in a driving rain storm, the floodgates opened for NA down the stretch. With 6:47 left to play, Schupansky hooked a corner kick into the net for a 3-1 lead and her ninth goal of the season. For scoring one goal and setting up two others, Schupansky was named the Wright Automotive Player of the Game.

Just over a minute after the Schupanksy marker, Wells turned on the speed to sprint by the defense and beat Fronk for her second goal of the night, and 11th of the season, for a commanding 4-1 advantage. With the game out of reach, Seneca Valley scored on more goal on a corner kick that caromed off the body of Olivia Kamarec with 3:30 remaining in the game. The Kamarec goal brought the final score to 4-2, Tigers.

North Allegheny senior goalie Julianna Werner made six saves on the night, some of the spectacular variety, to help ensure the victory.

With the victory, North Allegheny leaps to 5-2 overall and 4-1 in Section 1-AAAA. Seneca Valley slips to 2-2 overall and in the section. The Tigers will next face Shaler on the road on Monday night in another section contest.