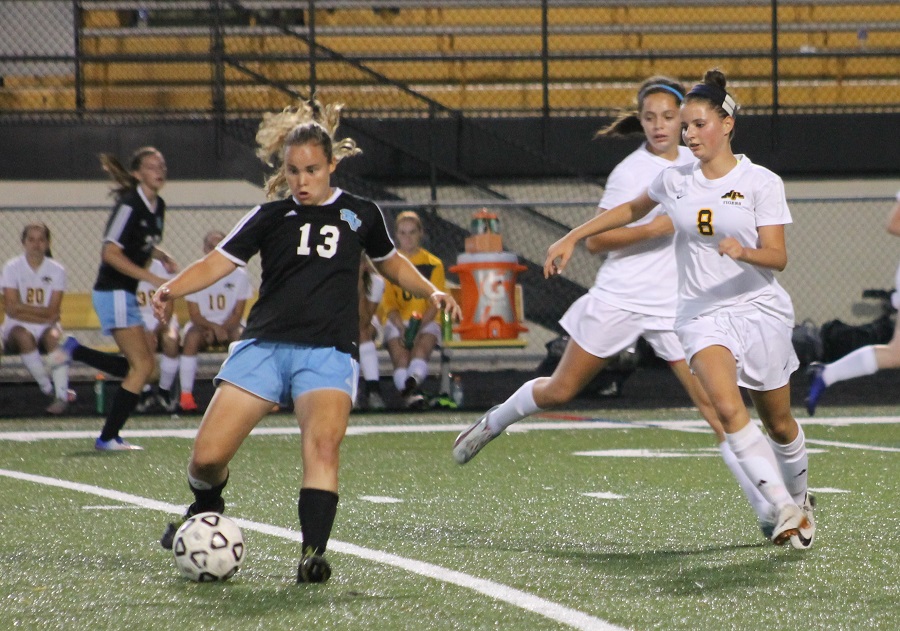 Jessica Frank’s goal with 28 seconds remaining lifted Seneca Valley to a 2-1 victory over the North Allegheny Tigers on Monday night at Newman Stadium. The Raiders outshot the Tigers, 16-1, and held a decisive possession advantage in the section opening win.

Led by first-year head coach Mark Perry, Seneca Valley stormed out of the gates with a goal by Ashely Rea 49 seconds into the game for a 1-0 lead. The Raiders nearly added on in the 15th minute but a great save by NA starting goalie Cara Schwartz kept the score at 1-0.

Seneca Valley’s attack kept the pressure on NA as the Raiders generated three corner kick opportunities, amongst 10 corners on the night, in the early stages of the second half. However, goalie Olivia Ruppersberger and the NA defense kept SV from adding on.

North Allegheny’s managed one shot on net in the game but made it count. With 21 minutes remaining in the game, freshman Ava Ruppersberger received a pass from Hannah Anderson and found the back of the net to tie the game at 1-1. Ava Ruppersberger was named the Wright Automotive Player of the Game.

Following the Ava Ruppersberger goal, the urgency of the NA attack picked up and generated a few good chances. However, it was Seneca Valley who capitalized for the game-winning goal in the 80th minute by Frank to send the Raiders back to Harmony with a 2-1 triumph.

North Allegheny falls to 1-2 overall and 0-1 in Section 1-AAAA. Seneca Valley improves to 3-2 overall and 1-0 in the section. The Lady Tigers look to bounce back on Wednesday night with another section contest at home against the Shaler Titans.