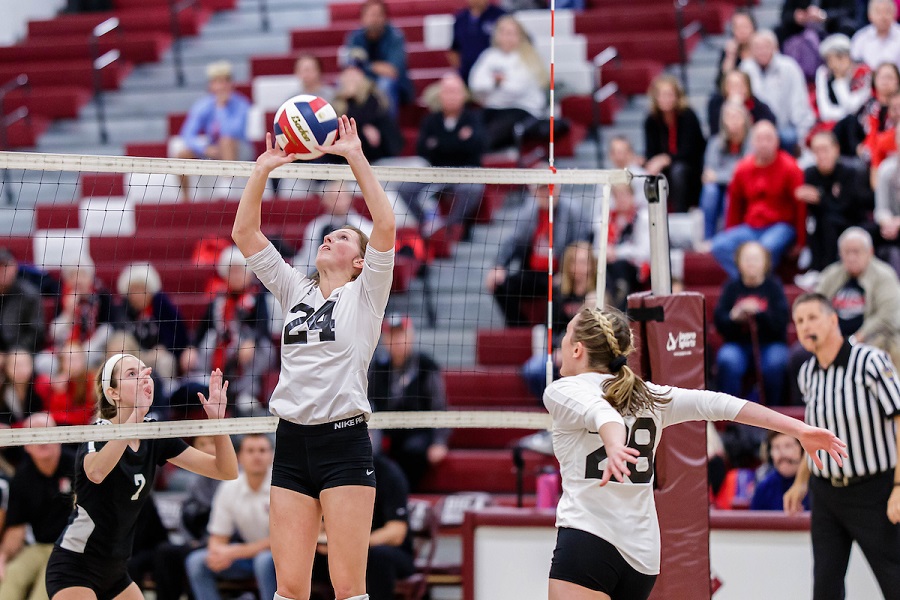 For over a half-century, the Miller Family has been closely associated with North Allegheny volleyball; add in the word “champion” and all three are synonymous.

The tradition begins with Bob Miller, who coached the NA boys’ volleyball team from 1968-2002 and the NA girls’ team from 1982-2002, winning a combined eight WPIAL titles and seven state crowns. His son, Dr. Brian Miller, won a PIAA title in 1991 at North Allegheny, and later a national championship at Penn State University in 1994. The championship volleyball legacy has continued with Bob Miller’s granddaughters, Abby and Paige Miller.

The oldest of the two sisters, senior Abby Miller began playing volleyball as soon as she was old enough to throw a ball and started playing club at age 10. Her affinity for the sport was instant.

“When I really started getting into (volleyball), my Dad would take Paige and I to the gym,” said Abby Miller. “I’ve done setting drills since I was probably eight-years old. He really started with the technical side of it too so I always enjoyed going to the gym to get reps.” 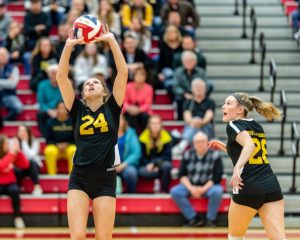 Meticulous in her preparation, Abby Miller continued her progression through middle school and became the setter for the North Allegheny JV team by the time she reached high school in 2016.

“I really enjoyed that season. The sophomores that were around me on the team that year were really talented…I had always been close to those girls because I played in middle school with them.”

The facilitator in a 5-1 system, the JV experience paid huge dividends for Abby Miller and the Tigers the following season. Running the same formation in 2017, Abby Miller took over as the starting setter as a sophomore. She helped NA win a WPIAL and PIAA championship with a perfect 24-0 record.

During the 2017 title run, perhaps a win that best epitomized the grit and determination of NA volleyball occurred in the PIAA semifinals against Garnet Valley. After dropping the first two sets, the Tigers rallied to win the next three. On the brink of elimination in the fifth set, NA trailed 15-14 before Abby Miller won the block on a memorable joust for a crucial point to even the score. The play propelled NA to a 20-18 win in the fifth set and advanced the team into the PIAA championship.

“That match and the feel of winning it – that feeling was amazing. Then we went on to the finals and kind of rolled, 3-0.”

As the 2018 season approached, the emergence of sophomore Paige Morningstar, a Louisville recruit, gave the Tigers the luxury of having two Division I caliber players at the setter position. Moving to a 6-2 system, North Allegheny utilized the talents of both Morningstar and Abby Miller as setters and hitters, making the Tigers even more dangerous than ever before.

“As soon as we clicked in that role, it was really fun because we could strategize on how to confuse the other team, who to set and what plays to run. I feel like having two leaders on the floor created a consistency to the team that was helpful.” 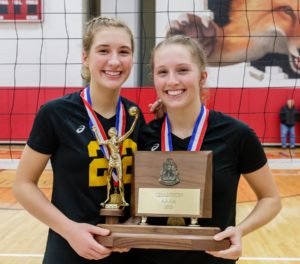 With the team bombarding opponents from all angles, the Tigers successfully defended their WPIAL and PIAA title with another perfect season, this time going 23-0.

“I feel like the girls on that team were special because we had a consistency of play that I’ve never seen or experienced before…Even under the amount of pressure of trying to go back-to-back and trying to keep a perfect season, we never felt under pressure at all. That was a really fun year for me.”

By seasons end, Abby Miller was named the Pennsylvania Gatorade Girls Volleyball Player of the Year and the Pittsburgh Post-Gazette Player of the Year. The 2018 campaign was extra special for the entire Miller family as younger sister, Paige, was a freshman hitter on the championship team, and her mother, Heidi, North Allegheny’s head coach, was tabbed the PA Girls Volleyball Coach of the Year by the NFHS Coaches Association.

The goal of a three-peat was the task at hand for the 2019 Tigers, and now a senior, Abby Miller was ready to lead the charge. North Allegheny carried an astonishing winning streak of 65 in a row into the WPIAL championship game but was upended by upstart Canon-McMillan in five sets. While the streak was over, the hopes for a state crown were intact and the Tigers rattled off four consecutive wins to claim a third straight PIAA championship. 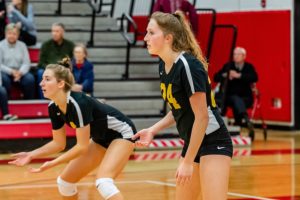 Paige and Abby Miller await a serve with grandfather, Bob Milller, looking on.

With the 3-2 win over Bishop Shanahan, Heidi Miller became only the second head coach in North Allegheny girls’ volleyball history to win three straight state titles. The first to do it was Bob Miller from 1992-1994.

“I especially think this year was special to me because (my grandfather) couldn’t be in the gym coaching us like he used to. Just to have him on the sidelines cheering for us and watching us in this third year was so fun and special.”

After three straight state championships and three consecutive selections to the all-state team, Abby Miller will take her volleyball and musical talents to Cleveland State where she’ll pursue a degree in Music Therapy. Musically inclined as well, Abby Miller plays piano and guitar. She sings for the North Allegheny choir and accompanies the choir on piano. She hopes to be a music therapist one day in a hospital setting with children.