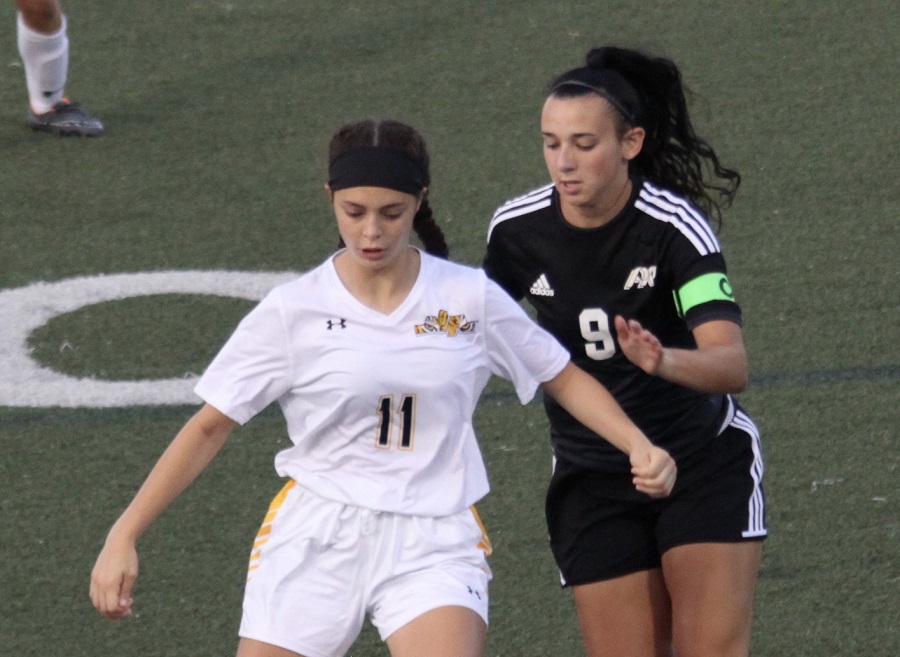 Senior Alex Adams scored the game-winning goal in double overtime to propel the North Allegheny Tigers to a 3-2 victory at Pine-Richland. Last season, the Lady Tigers stunned the Rams in the WPIAL quarterfinals, 2-0, en route to an appearance in the PIAA playoffs. For an encore, North Allegheny toppled the second-ranked Rams in the Section 1-AAAA opener on Wednesday night.

Adams not only capped the scoring but she opened it as well, giving North Allegheny a 1-0 lead with 27:51 to play in the first half. Junior Hannah Kirkpatrick assisted on the Adams marker.

The Tigers added on to the lead with 18:07 left in the half on a long-distance shot from junior Ava Ruppersperger. Pine-Richland goalie Katherine Kelly made a leaping effort but the Ruppersberger shot deflected off of her outstretched hand and into the net for a 2-0 NA advantage.

For the remainder of the half, Pine-Richland turned up the intensity on offense and continuously put pressure on the North Allegheny goal. The Tigers defense and goalie Madison Vukas were up to the challenge. With 10:30 left in the half, Vukas made a spectacular diving save on a shot by sophomore Megan Donnelly and quickly recovered to deny a rebound attempt from Alexa Burnham. Along with Vukas, defenders Caroline Noel, Jetta Kroll and Natalie Mudd helped keep NA’s 2-0 lead intact by halftime.

On the night, Pine-Richland outshot the Tigers, 21-7, and led in corner kicks, 7-1. That persistence eventually paid off as Donnelly, the Rams leading scorer from a season ago, broke through for a goal with 26:24 remaining to cut the Tigers lead to 2-1. With 12:41 to play, junior Alessandra Malobicky knotted up the score at 2-2.

Game play remained even throughout the duration of regulation and into the first overtime as well. Early in the second overtime, junior Emma Bundy stole the ball from deep in the NA zone and launched a 50-yard pass downfield to Adams who weaved through defenders and beat Kelly for the game-winning goal with 8:45 on the OT clock. For her efforts, Adams was named the Wright Automotive Player of the Game.

The win vaults North Allegheny to a 2-0 record overall and 1-0 mark in section play. Pine-Richland slips to 2-1 overall and 0-1 in the section. The Lady Tigers will host Shaler in another section contest on Saturday afternoon.