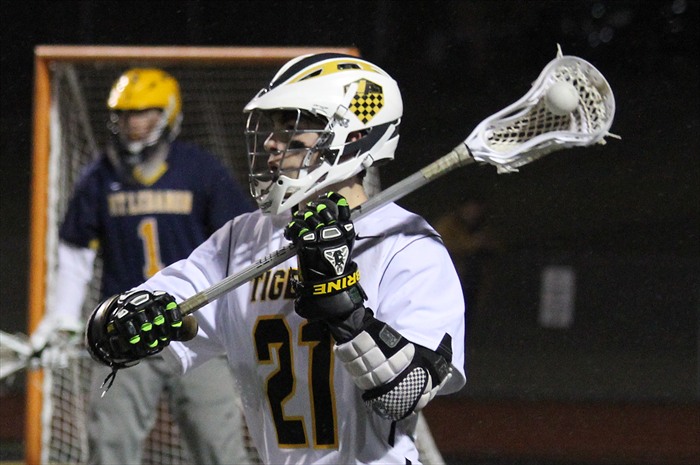 North Allegheny took to the road on Wednesday night and earned a 9-3 win over the Seneca Valley Raiders in the Division 1, Section 1 opener at NexTier Stadium.  Coming off a thrilling overtime win over Mt. Lebanon on Monday night, no such dramatics were necessary thanks to a barrage of third period goals.

Seneca Valley struck first for a 1-0 lead less than three minutes into the game, but the Tigers evened the score at 1-1 on a goal by Gavin Hagen with 4:45 to go in the first period.  Senior Nate Sprunk tallied a goal with 7:58 to play in the second period to bring the score to 2-1, North Allegheny.

Then the floodgates opened for the Tigers in the third period with five consecutive goals to take a strangle hold of the game.  Senior Teddy Ednaczyk scored two goals during the span, with Kyle Rullan, Zech Nachazel, and Zach Smith also scoring goals for a 7-1 Tigers lead.

In the fourth quarter, NA and Seneca Valley traded two goals apiece to bring the game to its final, 9-3, Tigers. Hagen and Spunk scored in the final stanza to round out the night for North Allegheny.

With the win, the Tigers’ third in a row, North Allegheny sits at 3-0 overall and 1-0 in section play. Seneca Valley falls to 1-1 overall and 0-1 in the section. The Tigers will take on Chartiers Valley on Monday night in a non-section contest at Newman Stadium.  The game will be broadcast live via the internet on the North Allegheny Sports Network.