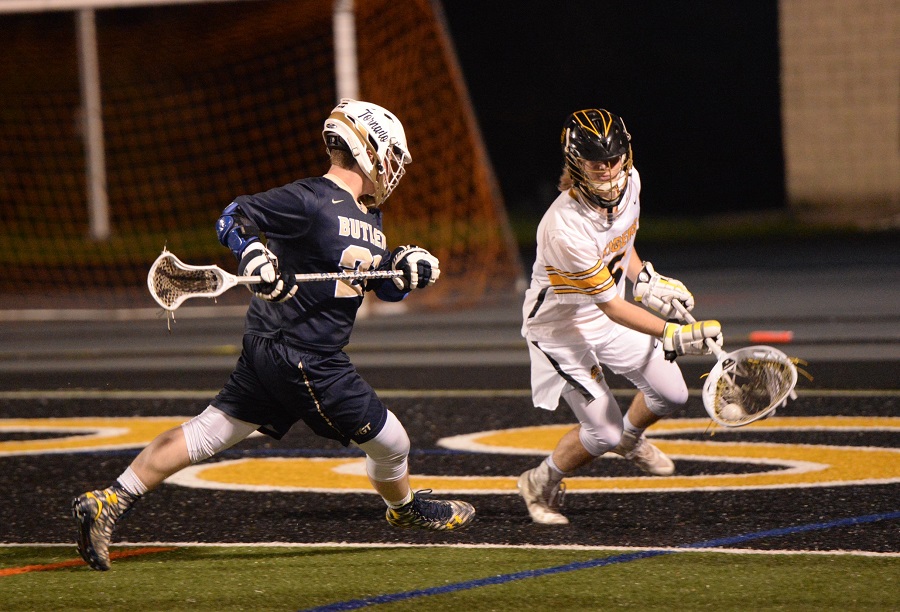 The North Allegheny boys’ lacrosse team won its seventh in a row on Tuesday night with a 12-6 triumph over the Butler Golden Tornado. It was senior night at Newman Stadium and four NA seniors fittingly scored goals in the win.

Seniors Matt Osten, Kyler Byerly and Ben Maenza opened the scoring with three goals in the first three minutes of the game to give the Tigers an instant 3-0 lead. Butler’s Dominic Fudoli got the Golden Tornado on the board with 7:03 to play in the first quarter, cutting the score to 3-1. Junior Isaiah Davis answered back with 2:50 left in the first to improve the NA lead to 4-1.

In the second period, Butler gained a bit of momentum with back-to-back goals from Connor Bachman and Fudoli, trimming the deficit to 4-3 with 10:53 on the second quarter clock. Despite Butler’s brief surge, the Tigers soon gained control of the contest by scoring five unanswered goals to end the half for a 9-3 lead. Davis scored twice to spark the NA run, followed by single markers from Nick Eck, Byerly and Ben Rohan.

Only one goal was scored in the third quarter and that belonged to Davis for his fourth of the night and a 10-3 Tigers lead.

Junior Nick Kairys and senior Antonio O’Barto each netted a goal early in the fourth quarter to balloon the score to 12-3, North Allegheny. Along with his goal to cap the NA scoring, O’Barto provided physical play on defense and corralled six groundballs to earn Wright Automotive Player of the Game honors.

With the game out of reach, Butler tallied three meaningless goals to round out the fourth quarter in a 12-6 Tigers win.

Senior Jake Williams led the Tigers with seven groundballs and Byerly chipped in with five.

Senior Liam Alker-Connelly got the start in goal and split time with sophomore Aiden Miller to combine for the victory.

Earning their seventh straight win, North Allegheny improves to 11-1 overall and 6-0 in Section 2-AAA. Butler slips to 3-3 in the section. The Tigers will have a tough road test with section foe Shady Side Academy on Thursday at 6:30 p.m.