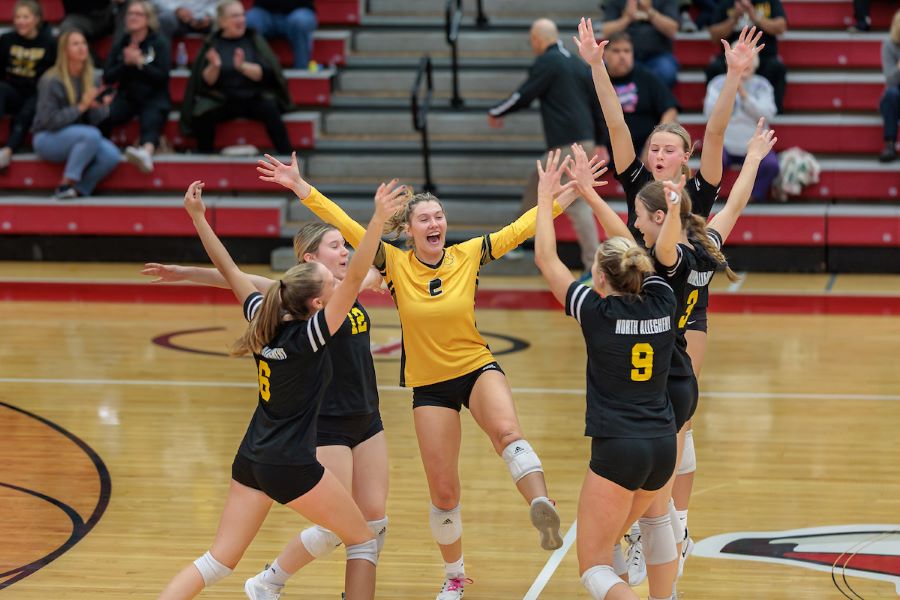 Tigers Claw Past Little Lions In PIAA First Round

The North Allegheny girls’ volleyball team bounced back from their defeat in the WPIAL championship with a 3-0 sweep of the State College Little Lions in the opening round of the PIAA Class 4A playoffs on Tuesday night. The Tigers earned the victory by set scores of 25-21, 25-20 and 25-19.

The Tigers and Little Lions dueled in the state playoffs for the 8th time in the last 11 seasons, with North Allegheny winning all of the seven previous matchups. History repeated itself on Tuesday night as the Tigers once again prevailed.

Coming off their 12th straight District 6 title, State College grabbed an early 14-11 lead thanks in part to the southpaw swing of senior Kate Lally, who tallied three of her 10 kills in the first set. Despite the deficit, the Tigers roared back and were tied 21-21 before rattling off four consecutive points to garner a 25-21 victory. Seniors Ella Zimmer and Carisa Treser clogged the middle of the net with a combined five blocks and played a significant role in the late stages of set one.

The second set saw North Allegheny build leads of 6-1 and 18-9 before State College rallied back to trim the NA advantage to 20-18. Powered by six kills from Treser, who posted a team-high 11 kills on the night, the Tigers pulled away late for a 25-20 win.

State College started fast in the third set and raced to a 9-5 lead, helped in part by a kill and ace from sophomore Sarah Tate. However, North Allegheny regained control and was sparked by senior Ella Deeter, who notched five of her seven kills in the final set to close out a 25-19 win and sweep of State College.

Other statistical leaders for NA included Zimmer and senior Maddie Fickess with eight and five kills, respectively. Senior libero Caroline Curran paced the defense with 15 digs, followed by senior Mia Tuman with 13 digs and senior Rebecca Pilotta with seven digs. Tuman delivered another dynamic all-around effort with a team-best three aces and facilitated the offense with a team-best 34 assists. For her efforts, Tuman was named the Wright Automotive Player of the Match.

With the victory, North Allegheny improves to 19-1 overall, while the season ends for State College with a 9-5 record. The Tigers advance to the PIAA quarterfinals to face District 3 champion, Landisville Hempfield, on Saturday at a site and time to be determined. The Black Knights earned a five-set win over Downingtown West on Tuesday night. The matchup between NA and Hempfield will be broadcast live by the North Allegheny Sports Network.