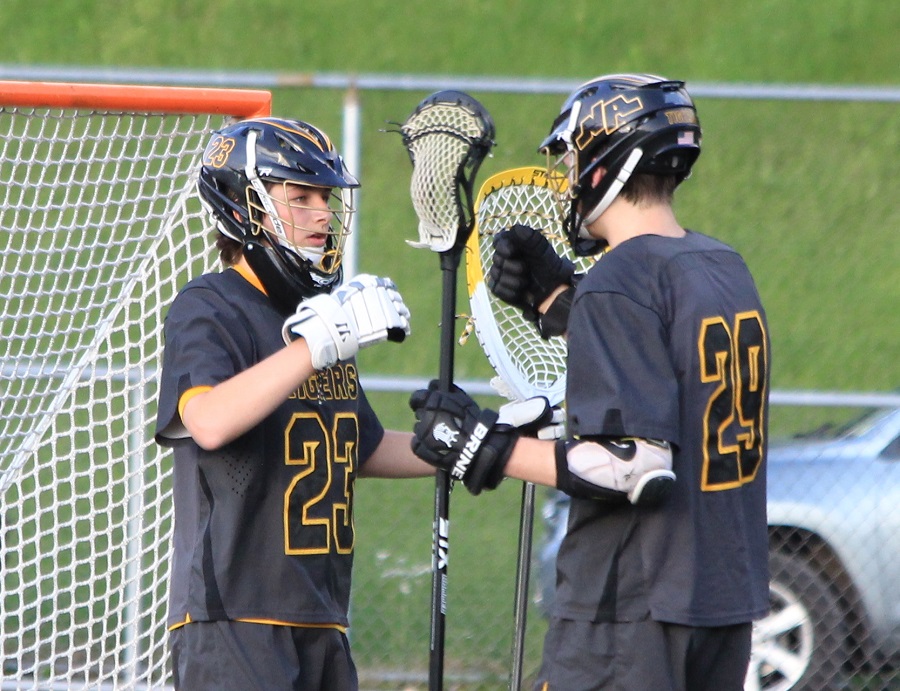 The North Allegheny boys’ lacrosse team won another thriller by defeating Shady Side Academy, 4-3, to move on to the WPIAL Finals on Friday night at Highmark Stadium in Pittsburgh. This will be the Tigers second consecutive trip to the title game.

Things started out good for the Tigers with NA getting the first goal of the game from Trevor Saundry on a nice assist from behind the net from Ben Maenza.  Shady Side tied the score at 1-1 on a man-up goal from Peyton Lane from 15 yards out.  Two minutes later, goalie Ean Kuska kept the game tied by stopping a shot from point-blank range on a two-on-one break.  The Indians did manage to take the lead into the locker room when Clayton Krol unleashed a shot to give the Indians a 2-1 lead.

Neither team scored in the third period due to outstanding defensive efforts from both sides.  For Shadyside, Henry Mihm had numerous stick checks and the Tigers Greg Ferringer, Jack Kairys, Doug Wild and Antonio O’Barto, among others, kept the Indians offense in check.

While the Indians controlled most of the first three periods in possession, the Tigers  took the lead in the fourth period, 3-2, by scoring two goals 26 seconds apart courtesy of Dillon Bugni and Jono Pelusi.  The Indians tied the game again at 3-3 with three minutes left thanks to a second goal from Krol.  The Tigers picked up the game winner from freshman Matt Osten with the assist from Wes Powell to earn a 4-3 triumph.  With the game winner, Osten was named the Wright Automotive player of the game.

The Tigers held off the Indians the final two minutes to celebrate the victory and second straight trip to the WPIAL finals. North Allegheny improves to 12-8 overall on the season. Friday’s championship game will be broadcast live via the internet on the North Allegheny Sports Network.