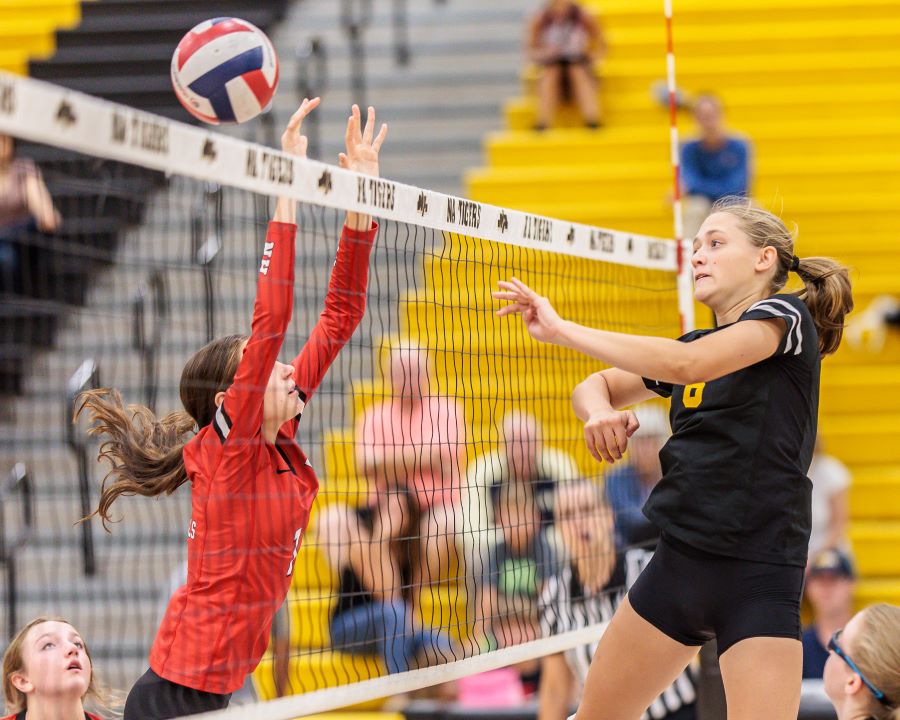 The North Allegheny girls’ volleyball team earned its 21st consecutive victory on Thursday night with a 3-0 section sweep of the North Hills Indians. The Tigers topped the Indians by set scores of 25-17, 25-11 and 25-10.

The upstart Indians hung tough with the Tigers in the first set and trailed only 9-8 thanks in part to a trio of kills by freshman Ashlyn Fazio. Despite the strong start for North Hills, top-ranked North Allegheny steadily increased the lead and earned a 25-17 win. Seniors Ella Deeter and Ella Zimmer shined in the opening set with four kills and two blocks each.

In set two, North Allegheny dominated the action enroute to the 25-11 win. Deeter continued her superb performance with three more kills and finished with a team-high nine kills and four blocks. For her efforts, Deeter was named the Wright Automotive Player of the Game.

Deeter saw time at setter in set three and dished out five assists, many of which going to junior Jamie Frisco, who pummeled the Indians with four kills. Frisco and the Tigers rolled to a 25-10 victory in the third set and closed out a 3-0 sweep.

Senior Mia Tuman facilitated the NA attack in the first two sets and posted 26 assists, adding six digs and an ace. Senior Carissa Treser and junior Julie Butler contributed to the offense with four kills each.

North Allegheny improves to 5-0 overall and 2-0 in Section 1-AAAA, while North Hills dips to 2-4 overall and 0-1 in the section. The Tigers return to action on Monday for a tough non-section matchup with North Catholic.