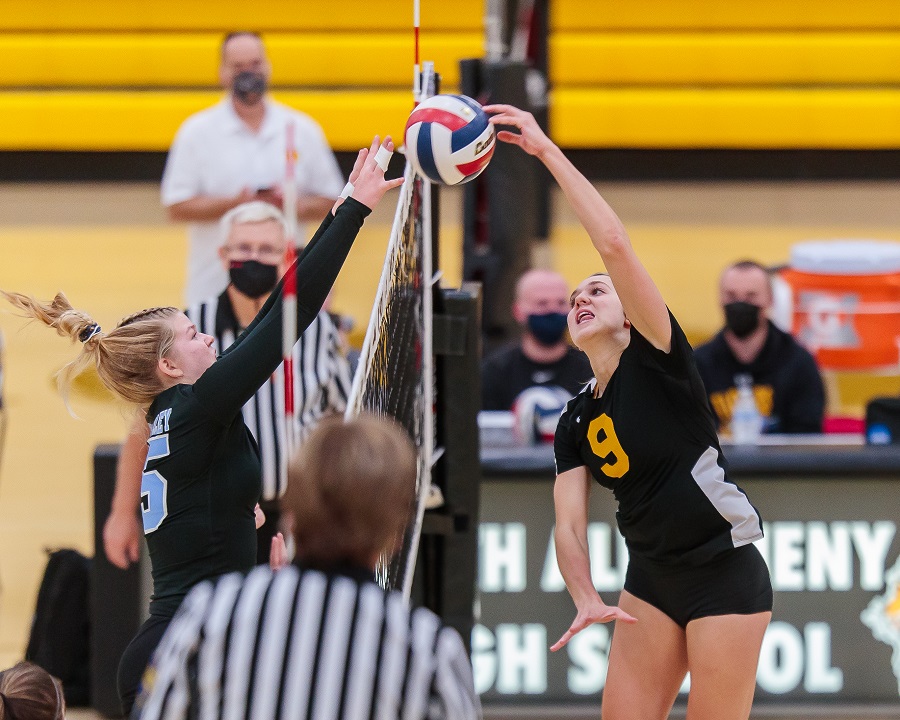 The North Allegheny girls’ volleyball team matched up with section rival Seneca Valley on Thursday night in the WPIAL Class AAAA quarterfinals and came away with a 3-0 sweep. The Tigers claimed the victory by set scores of 25-13, 25-14 and 25-20. It was the third consecutive season that the Tigers and Raiders met in the quarterfinal round with NA winning all three contests.

Coming off a first-round bye, the four-time reigning PIAA champions were on fire early and sprinted to a 23-8 lead in the first set. Despite a late 5-0 run by the Raiders, the Tigers closed out a 25-13 win. Senior Jadyn Perkins led the offense in game one with three kills and a pair of blocks. Senior Rachel Burton added a kill, a block and two aces in the set.

It was more of the same in set two as North Allegheny raced to a 22-8 advantage. Perkins continued her torrid hitting with three kills to help the Tigers earn a 25-14 triumph.

Seneca Valley put forth its best effort in set three and senior Emma Davis powered the Raiders to a 9-7 lead. The minor deficit was no trouble for the Tigers, who ultimately earned a 25-20 victory to secure the sweep. Junior Ella Deeter racked up four kills and a block in the final set to lead the way.

Perkins and Deeter paced the offense with 11 kills each on the night. Perkins also posted a team-best three blocks.

Providing another strong all-around performance, junior Mia Tuman was selected as the Wright Automotive Player of the Game and facilitated the offense with a team-leading 28 assists.

With the win, top-seeded North Allegheny improves to 14-1 overall, while eighth-seeded Seneca Valley’s season ends with an 11-7 record. The Tigers will take on fourth-seeded Moon on Tuesday night in the WPIAL semifinals.