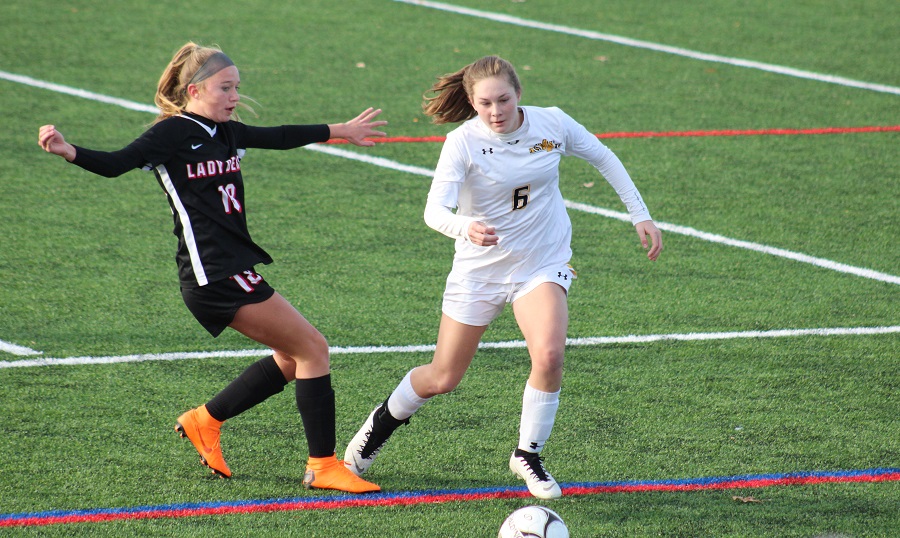 North Allegheny’s magical run came to an end Saturday afternoon in the PIAA Quarterfinals falling 3-2 to Boyertown in an overtime thriller.

North Allegheny had scoring chances early and often and eight minutes into the game was able to get on the board when Ava Ruppersberger put a shot on net, the shot hit off a Boyertown defender and into the net giving the Tigers the early 1-0. It was Ruppersberger second goal in as many games. Later in the half, the Bears of Boyertown were able to pick of two goals four minutes apart from Sandra Devlin and Sam Goffice, respectively. No more scoring came out of the half and the Tigers trailed 2-1.

The second half was complete domination by North Allegheny. They outshot the Bears 7-0 in the half thanks to great play from their back line, which consisted of Tulasi Syamala, Riley Miara, Alexa Spano and Natalie Mudd. These four stifled Boyertown at every turn in the second half, not letting anything get near keeper Madison Vukas. With the defense playing so well, the offense got going again and with 17:11 left in regulation Sarah Schupansky put a left-footed shot right outside the box into the top right corner tying the game 2-2. It was Schupansky’s 23rd goal on the season. Both teams had multiple chances down the stretch but ultimately nothing found the back of the net and we were headed to overtime.

Schupansky was named the Wright Automotive Player of the Game. She had the equalizer and harassed Boyertown’s defense all afternoon with constent pressure along with Ruppersberger, Emma Bundy and Hannah Kirkpatrick.

The Tigers season ends at 18-3-1, but it was an historic year to say the least. North Allegheny won their first section title since 2015, went undefeated in the section for the first time in program history and won the program’s first ever WPIAL Championship. This was one of the best teams in NA girls soccer history and by far the most decorated one.