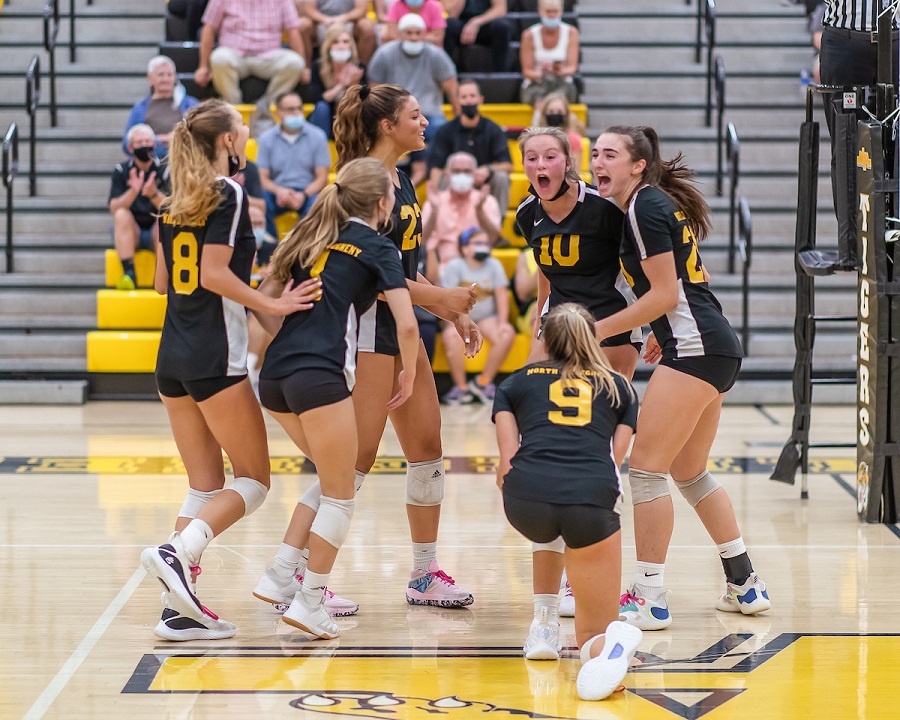 In a five-set thriller on Tuesday night, the North Allegheny girls’ volleyball team rallied from a two-set deficit for a 3-2 victory over the No. 1-ranked Shaler Titans. The Tigers won by set scores of 21-25, 23-25, 25-14, 25-22 and 15-7. The outcome pulls NA into a first-place tie with Shaler atop the Section 1-AAAA standings.

Earlier in the season on Sept. 23, Shaler snapped North Allegheny’s 27-match winning streak with a 3-0 sweep. In set one, it appeared the Titans were on their way toward extending their own 14-match winning streak. Tied 17-17 late in the first set, Shaler was powered by the right arm of sophomore Hilary Quinn and pulled away for a 25-21 triumph. Quinn delivered six kills in the opening set.

Set two was another nip-and-tuck affair and was tied 23-23 before a Mackenzie Barr block and a North Allegheny hitting error helped Shaler earn a 25-23 victory. Senior Mia Schubert tallied five kills in the second set to spark the Titans.

After dropping the first two sets, North Allegheny bounced back in the third. Junior Maddie Fickess provided consistent play throughout the night and junior Ella Deeter unleashed four kills in the set as the Tigers rolled to a 25-14 victory in set three. Deeter finished with a team-high 17 kills and added 15 digs on defense. Fickess clogged the net with six blocks and slowed down Shaler’s outside hitters.

North Allegheny stormed out of the gates in set four as well and grabbed a 17-11 lead. However, Shaler rallied with a 4-0 run, and later, a 5-0 run, to cut the NA lead to 22-21. Spearheaded by senior Jadyn Perkin’s five kills and two blocks in the set, the Tigers outlasted the Titans for a 25-22 win. After a slow start, Perkins hit her stride in the final two sets and finished with 13 kills and a team-best seven blocks to earn Wright Automotive Player of the Match honors.

Set five was a microcosm for the entire match as North Allegheny fell behind 3-0 in set five but rattled off 10 of the next 12 points to take a 10-5 lead. With momentum on their side, the Tigers continued to blister the Titans with the big swings of Perkins and junior Carissa Treser to claim the fifth set, 15-7, and prevail for a 3-2 victory. Treser touched double digits in kills with 12.