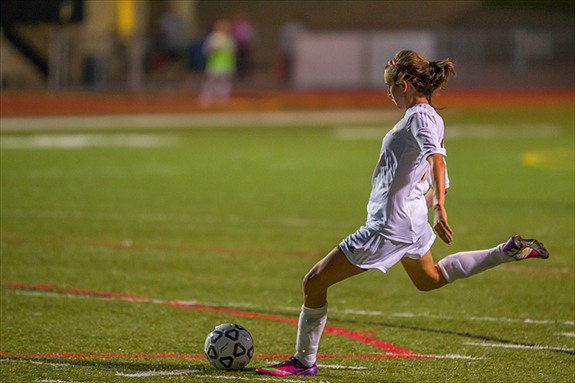 Staying unbeaten on the season, the North Allegheny Girls Soccer Team rallied from a two goal deficit to force overtime and earn a 2-2 tie on Saturday against the Pine-Richland Rams. In the first half, the Rams jumped to a 2-0 lead thanks to goals by Erin Rogers and Amanda Kalin. Pine-Richland nearly took a strangle hold of the game in the 36th minute of the half, but NA goalie Madison Martin made a huge save on a PR breakaway to keep the score at 2-0, Rams.

In the second half, the Lady Tigers began to pick up their play and created some good scoring chances. In the 25th minute of the half, sophomore Amanda Miller made a terrific play from the corner, beat a defender and then ripped a left-footed shot over Pine-Richland goalie Leah Roth to cut the deficit to 2-1. Miller struck again in the 33rd minute thanks to a through ball from senior Ryleigh Gapczynski, burying a shot over Roth to even the score at 2-2.

North Allegheny had the better of the scoring chances in both overtimes as the Rams were held to just two shots. Pine-Richland’s Roth made several big saves in overtime to keep NA from scoring, including a big stop off a corner kick in double OT and another moments later denying Savana Yurick. NA’s Martin was also strong in net as both net minders posted eight saves on the night.

The Lady Tigers claim the season set against Pine-Richland thanks to an earlier 2-0 win on September 9. For the season, North Allegheny is 11-0-1 overall and 7-0-1 in Section 2-AAA.  The Rams hold a 7-3-2 record overall with a 4-2-1 mark in the section. The Lady Tigers will host Butler on Tuesday night at 7:45 pm in another section affair.