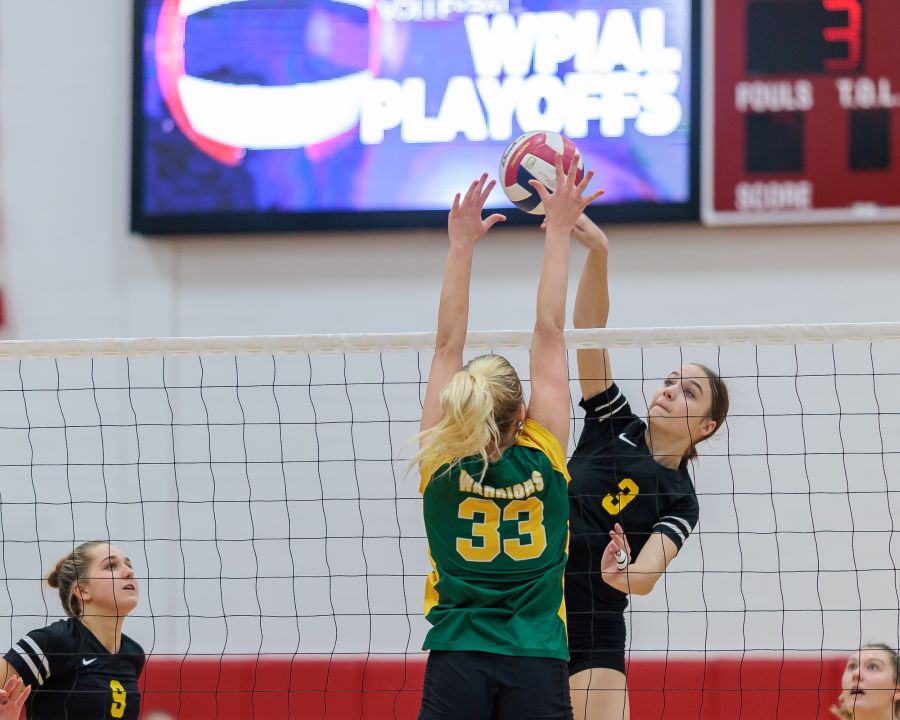 Tigers Return To WPIAL Finals With 3-0 Sweep Of Warriors

The North Allegheny girls’ volleyball team punched its ticket to the WPIAL finals for a sixth consecutive season thanks to a 3-0 sweep of Penn-Trafford on Tuesday night in the WPIAL Class 4A semifinals at Fox Chapel High School. The Tigers earned the sweep by set scores of 25-13, 25-20 and 25-16. Saturday’s title tilt against Pine-Richland will mark the ninth time in the last 10 seasons the Tigers will appear in the WPIAL championship.

The Tigers stormed out of the gates in the first set and grabbed a 6-1 lead in the early going. In a well-balanced effort, senior Carissa Treser helped pace the offense and steered NA toward a dominant 25-13 win in the opening set. Treser totaled a game-high 11 kills on the evening.

Appearing in the WPIAL semifinals for the first time since 2006, Penn-Trafford regrouped in the second set and kept things tight through most of the game thanks to a spirited effort from senior Kaelynn Loffredo, who tallied four kills in the set. With the scored tied 16-16, senior middle hitter Maddie Fickess delivered a pair of timely kills and blocks to help spark a 6-0 run to give NA command, 22-16. The Tigers rode that momentum to a set two victory, 25-20. Fickess helped clogged the net with four blocks and was named the Wright Automotive Player of the Match.

In set three, Penn-Trafford junior Elle Visco tallied three kills to give the Warriors a 7-3 lead, their largest of the night. The PT advantage didn’t last long, however, as North Allegheny answered back by taking seven of the next nine points for a 10-9 lead and never trailed again. Senior Ella Deeter powered the Tigers with four of her 10 kills in set three and NA rolled to a 25-16 win and sweep.

Senior setter Mia Tuman had another exemplary all-around night for the Tigers with a team-high 37 assists, six kills, and a team-best five blocks. Junior Marin Dunaway added to the offense with six kills. Senior Rebecca Pilotta led the squad in aces with three. Senior libero Caroline Curran totaled 10 digs, followed by Deeter with nine and Pilotta with eight.

North Allegheny improves to 18-0 overall on the season and advances to the WPIAL championship to face Pine-Richland. The match is scheduled for 5:00 p.m. on Saturday at Robert Morris University’s UPMC Events Center. The contest will be broadcast live by the North Allegheny Sports Network/Trib HSSN.