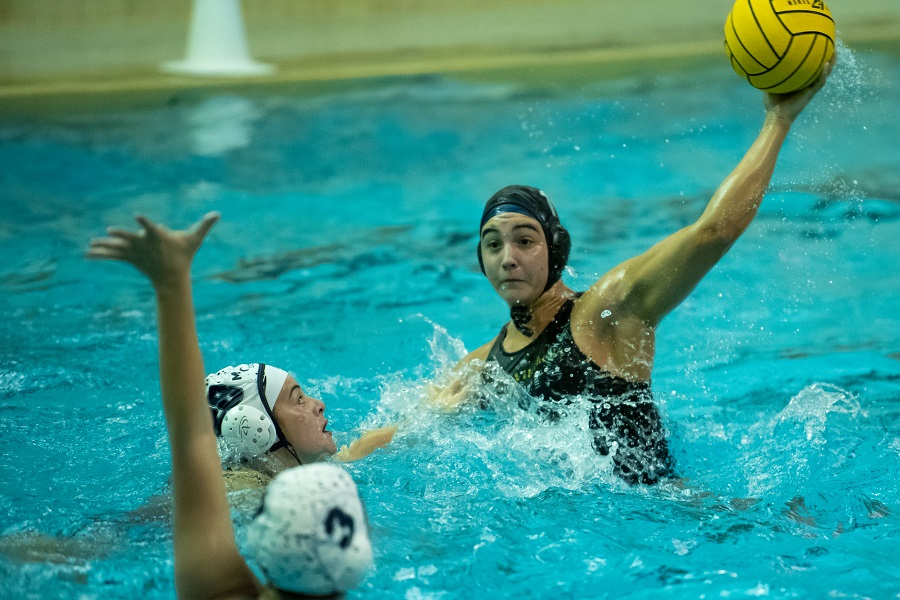 The North Allegheny water polo teams played in their final home games of the 2022 season and earned a sweep over Western Conference foe, Cathedral Prep, on Tuesday night. The NA Boys remained unbeaten in conference play with a convincing 17-9 win, while the Lady Tigers rolled the Ramblers by an 11-4 decision.

The evening started with the girls’ contest and Cathedral Prep devoted a defensive double team to guard UCLA commit, Rebecca Melanson. While the double team kept Melanson off the board in the first quarter, it didn’t stop the Tigers as Melanson facilitated the ball to freshman Tori Tieppo for two goals in the opening stanza for a 2-0 lead. 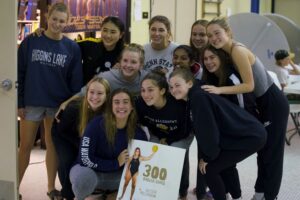 Rebecca Melanson celebrates her 300th career goal with her teammates.

In the second quarter, North Allegheny blew the game wide open with four unanswered goals. Freshman Mikaela Dassanaike scored her fourth goal of the season with 4:48 to play in the half for a 3-0 lead. That set the stage for Melanson, who scored her 300th career goal and 95th of the season, to increase the Tigers lead to 4-0 with 2:14 remaining in the half. Melanson scored again with 35 seconds remaining before intermission and assisted on a goal by freshman Bella Spino with just two seconds left, and NA held a 6-0 lead at the half.

Cathedral Prep traded goals with North Allegheny in the second half and couldn’t inch back into the game, ultimately falling to the Tigers, 11-4. Melanson finished with five goals on the night, giving her 304 for her career, and a team-high six assists. Juniors Carissa Jones and Katyusha Peregoncev also tallied markers for the Tigers in the blowout. In net, junior goalie Izzie Trunzo turned in eight saves to earn the victory. For Cathedral Prep, senior Emily Consiglio led the Ramblers with two goals.

Coming off an impressive performance at the Beast of the East Tournament, the NA Boys continued to ride a wave of momentum into their contest with Cathedral Prep. The Ramblers battled hard in the early going and trailed only 3-2 with 1:49 left in the first period thanks to a pair of Mitchell Bradford goals. However, the Tigers overwhelmed the Ramblers by scoring eight of the next nine goals and took an 11-3 lead into halftime. NA stretched the lead to 15-4 by the early stages of the fourth quarter before calling off the dogs in the final period.

Despite playing without two starters, the Tigers didn’t miss a beat and were led by seniors Sean McClellan and Asher Jones with five and four goals, respectively. Junior Jonathan Mowry and senior Nico Jacobs-Alarcon netted two goals apiece. Also touching the scoresheet were Justin Morrison, Camden Wright, Anthony Hollo and Caden Currykosky with one marker each. Goalie Eliot Maravich played the first three period and into the early stages of the fourth before freshman Michael Stefanko closed out the win in the waning minutes. For Cathedral Prep, Bradford totaled a hat trick and Callum Snider-Mills finished with a team-high four goals.

Melanson and McClellan earned Wright Automotive Player of the Game honors in their respective contests.

Following Tuesday night’s results, the NA boys’ team improves to 13-1 overall and 11-0 in the Western Conference, while the Lady Tigers improve to 10-4 overall and 9-2 in conference play. The Tigers will participate in part one of the Erie Challenge this Saturday at Cathedral Prep.