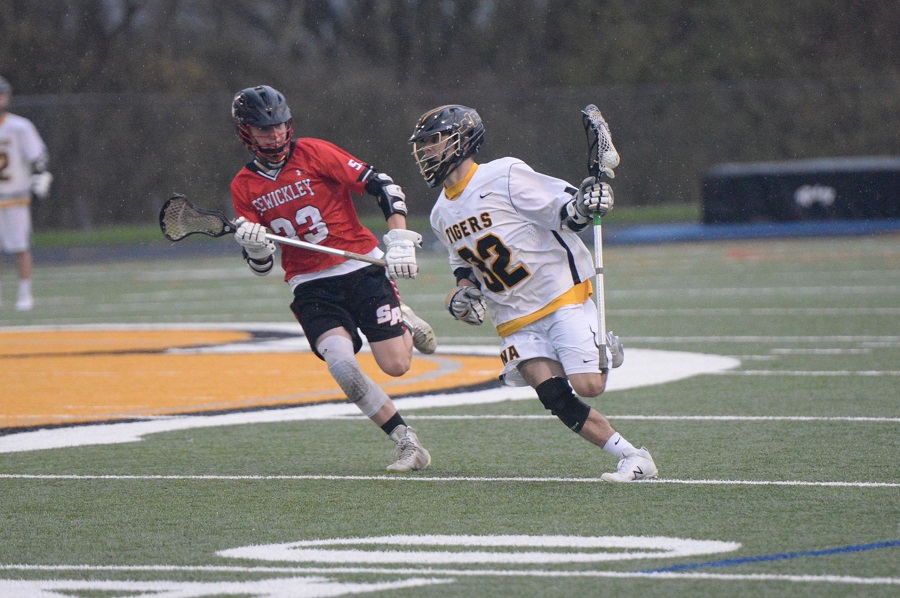 On a rainy night at Newman Stadium, the North Allegheny boys’ lacrosse team poured on the goals against the Sewickley Panthers en route to a 15-2 victory in Section 3-AAA action. Sophomore Ben Maenza, freshman Isaiah Davis and senior Trevor Saundry each tallied a hat trick for the Tigers in the win. Maenza scored all of his goals during the most competitive phase of the game in the first period and was named Wright Automotive Player of the Game by the North Allegheny Sports Network.

Maenza’s three goals, and two more markers by senior Gavin Hagen, helped the Tigers build a 5-0 lead in the first period. The NA advantage ballooned to 11-1 by intermission thanks to two goals by Davis, two goals by Kyler Byerly, a single goals by Wes Powell and Antonio O’Barto. Davis notched his third goal of the night with the only marker of the third quarter and Saundry finished off the Panthers with a natural hat trick in the fourth quarter.  Sewickley Academy’s goals were scored by Brian Weir and Ian Deihl.

With the win, North Allegheny vaults to 8-1 overall and 4-0 in Section 3-AAA. Sewickley Academy falls to 4-5 overall and 2-3 in the section. The Tigers host Kiski Prep on Wednesday night.