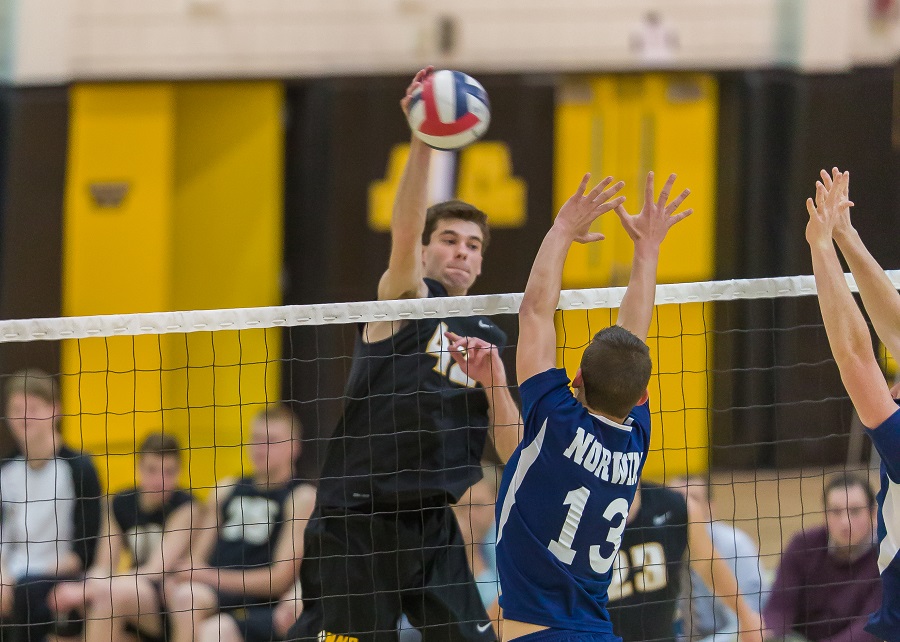 In a rematch of last year’s WPIAL Class AAA Championship, the North Allegheny Tigers once again topped the Norwin Knights on Monday night, 3-0.  Norwin was a stiff non-section test for the Tigers and NA passed with flying colors, collecting a sweep by set scores of 25-10, 25-20 and 25-20.

Both teams entered the match in third place in their respective sections and looking for a win to boost their potential seeding in the upcoming WPIAL playoffs next month. The Tigers pounced on the Knights from the outset and took a 3-0 lead courtesy of two kills and a block from Canyon Tuman.  It was the start of a big night for the freshman who finished with a team-best 11 kills and seven block assists.  For his efforts, Tuman was named the Wright Automotive Player of the Match.

While Tuman dug Norwin an early whole, the Knights buried themselves with numerous unforced errors and were blown out by the Tigers in set one, 25-10.  The second set proved to be much more competitive as Norwin finally found some rythym and trailed by just one point, 14-13, midway through the set.  However, North Allegheny again finished strong thanks to Tuman and senior Nikola Topich who posted four kills in the set to close out a 25-20 win. Topich totaled 10 kills and two block assists for the match.

In the third set, it was more of the same as Tuman and Topich battered Norwin with their big swings. Both players were set up nicely by senior Jeremy Best who tallied 32 assists. Best and Robet Stiefvater were stout in the middle and posted seven and six block assists, respectively. On defense, libero Ethan DeRubbo notched a team-best 16 digs. North Allegheny finished off the sweep with a 25-20 victory in set three.

North Allegheny leaps to 7-4 overall with the win.  The Tigers return to section action with a visit to Pine-Richland on Thursday night.  Start time is slated for 7:00 pm.