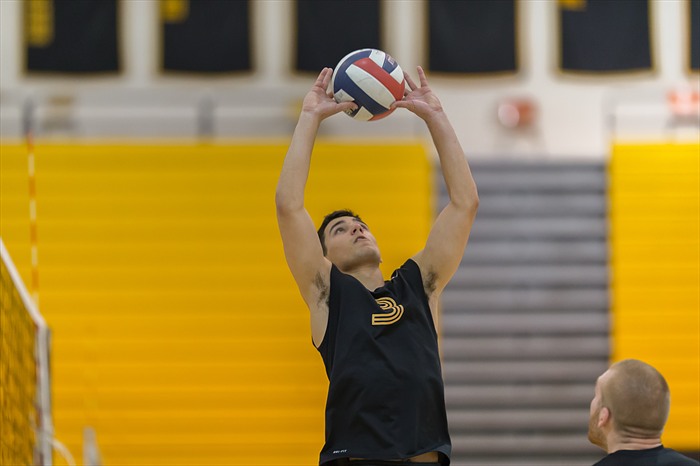 In the first matchup this season between North Allegheny and Pine-Richland, the Rams found a way to steal a set from NA in a dual match for the first time in team history.

The Tigers made sure that didn’t happen again on Tuesday night.

Tuesday evening’s match started well for North Allegheny, as the Tigers jumped out to a 5-1 lead and then kept the Rams at bay in the first set. Senior outside hitter David Haus keyed the Tiger attack in the opening game, notching a team-high five kills.

The second set proved to be all Tigers from the start, as North Allegheny scored nine of the game’s first 10 points, including each of the first six, and cruised to the 14-point victory.

Pine-Richland battled in set three, as the teams went back and forth throughout. With the game tied at 23, however, senior middle Brendan Brown scored a kill and senior outside hitter Mitch Higgins tallied an ace to secure the match win for the Tigers.

Brown led the way on offense for North Allegheny with a team-high 10 kills, while Haus and Higgins added nine each. Higgins also recorded a team-best four aces and tied for the team lead with eight digs.

Senior Antonios Balouris shared time as the team’s primary setter with junior Jeremy Best, but Balouris still managed to tally 19 assists, seven digs and two blocks. For his steadying presence as a passer, Balouris was named Wright Automotive Player of the Game.

The top-ranked Tigers now have a week off before returning to action with another Section 2-AAA match at Butler next Tuesday. Start time for that contest is set for 7 p.m.