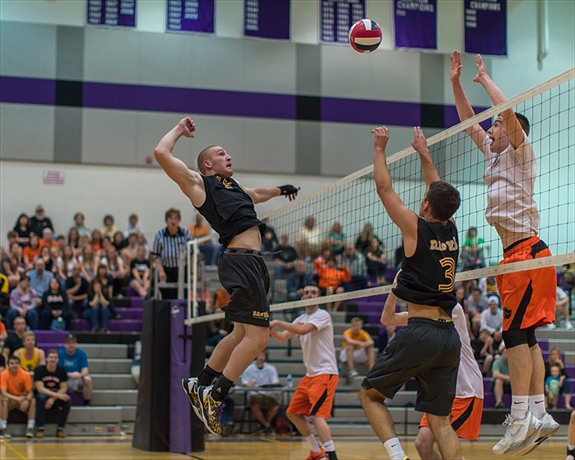 In a rematch of last season’s WPIAL title match, the North Allegheny boys volleyball team again bested Bethel Park, this time with a 3-1 victory in the semifinals Tuesday night at Baldwin. Set scores were 27-25, 25-17, 23-25 and 25-16.

With the win, the Tigers earned the right to play for their eighth-straight WPIAL crown Thursday night against Norwin. The Knights knocked off Fox Chapel 3-1 in the evening’s first semifinal matchup.

North Allegheny started quickly in Tuesday’s match with the Black Hawks, jumping out to leads of 4-0 and 7-2 in the first game. Bethel Park battled back, though, tying the score on five separate occasions, including at 25. At that juncture, however, the Tigers tallied two-straight points to claim the victory in set one.

Game two remained close in the early going, but then North Allegheny took over. With the score at 10-9 in their favor, the Tigers rattled off five points in a row to gain a sizable advantage and never looked back in the eight-point win.

The Black Hawks tried to claw back into the contest with a victory in the third game, but North Allegheny led wire to wire in set four to close things out and advance to the championship match.

Throughout the night, the Tigers controlled play at the net with their defense, garnering 29 total blocks. Senior middle blocker Brendan Brown tallied nine of those 29, and coupled with 17 kills, it was enough to earn him the honor of Wright Automotive Player of the Game.

Juniors Jeremy Best and Robert Stiefvater also played a big role up front for the Tigers, notching six blocks apiece. Senior David Haus added five blocks of his own to go along with 17 kills and seven digs.

Thursday’s title match against Norwin will get underway at approximately 8 p.m., following the conclusion of the Class AA championship. Both contests will once again be played at Baldwin High School.