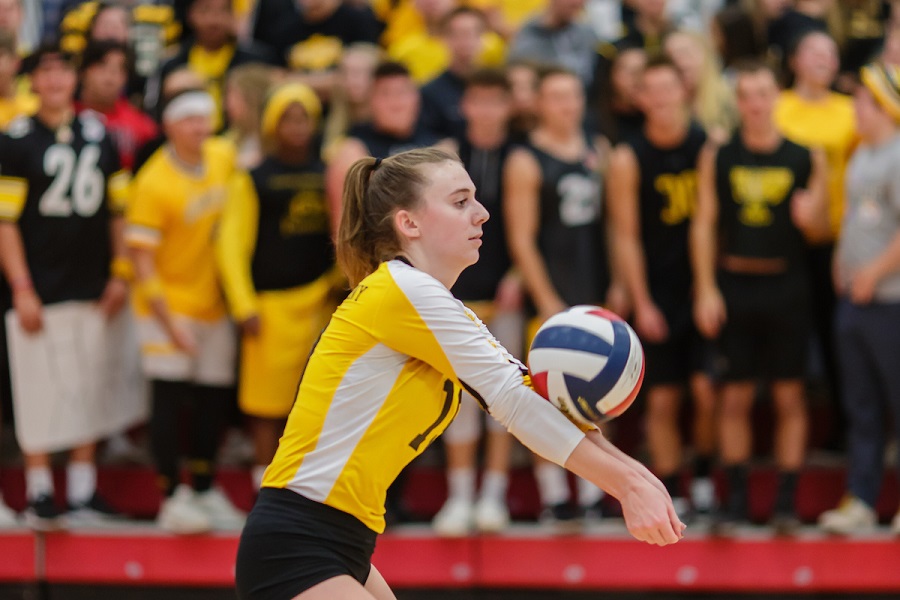 The North Allegheny girls’ volleyball team punched its ticket to the PIAA championship game for the second year in a row with a 3-1 victory over the Garnet Valley Jaguars at Big Spring High School in Newville, PA. The contest was a rematch of a five-set thriller in the state semifinals from a year ago, in which the Tigers rallied from a 2-0 deficit for a 3-2 victory. On Tuesday night, the reigning PIAA champions needed only four sets in the rematch to extend their winning streak to 46 in a row.

Set one was similar to the exciting contest from a season ago as North Allegheny edged Garnet Valley, 25-23. Sophomore Paige Miller led the charge in the first set with five kills, on her way to a team-high 14 kills. Paige Miller added 17 digs and two aces on the night.

It appeared North Allegheny would claim a victory in set two as well. Trailing 17-15, the Tigers rattled off seven straight points to garner a 22-17 advantage. Senior Allena Carmody notched a pair of aces during the 7-0 spurt. However, Garnet Valley scored eight of the final nine points to claim a 25-23 win and even the match score at 1-1.  Jaguars junior Sam Mann tallied five kills and a block in the second set for the District 1 runners-up.

While the first two sets where nip-and-tuck, the third set decisively belonged to North Allegheny. The Tigers rolled to a 25-12 win, spearheaded by senior Anna Sprys, who posted five kills and two blocks. On the evening, Sprys totaled 12 kills, seven blocks and two aces.

The fourth set returned to the seesaw nature of the first two sets. With the score tied 21-21, North Allegheny prevailed with a 4-0 run, including a pair of kills by Sprys, for a 25-21 triumph and a 3-1 match victory.

Facing a defensive-minded team in Garnet Valley, led by libero and Rowan University commit, Julia Bowes, it was North Allegheny’s defensive stars who shined the brightest. NA senior and Robert Morris University commit, Allena Carmody, covered every floorboard of the Big Spring High School gymnasium and tallied a team-best 19 digs. For her efforts, Carmody was named the Wright Automotive Player of the Game.

With the win, North Allegheny improves to 22-0 on the season and will take on Bishop Shanahan, also 22-0, in the PIAA championship game at 6 p.m. on Saturday at Cumberland Valley High School. The title tilt will be broadcast live via the internet on the North Allegheny Sports Network. Garnet Valley ends its season with a 21-4 record.