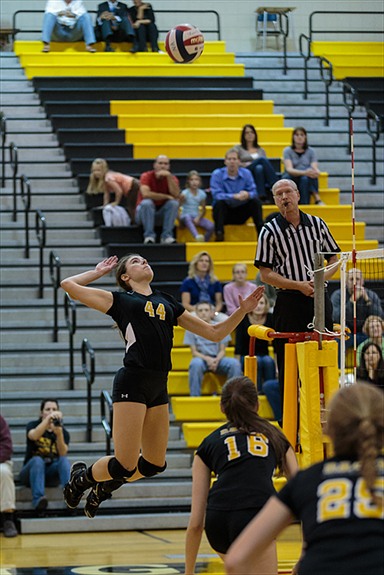 Avenging a defeat in the WPIAL Semifinals last season, the Lady Tigers earned a measure of revenge on Thursday night with a 3-0 sweep of the Fox Chapel Foxes.  A year ago, the Foxes edged NA in a white knuckler affair at Chartiers Valley in the playoffs, 3-2, but this time around it was the Lady Tigers who got the best of their section rivals.  North Allegheny claimed the win by set scores of 25-14, 25-16, and 25-21.

In the early going, Fox Chapel and NA traded blows in the opening set before senior outside hitter Ashley Leto began to assert her play on the Foxes.  Trailing 7-5, Leto posted a kill and a block to even the score at 7-7 and open up an 11-3 run for the Lady Tigers. Continuing the run, Leto collected another two kills and back-to-back aces to swing the pendulum in NA’s favor, 16-10.  Later in the set, the Tigers put the Foxes away thanks to back-to-back aces by senior Jessica Samuels to increase the lead to 24-14.  Erin Swartz iced the first set by winning a joust over the net for a 25-14 victory.

Fox Chapel jumped out to a 5-0 lead in the second set behind three aces by sophomore Ana Spangenberg. However, North Allegheny responded with a 5-0 run of their own, aided by a pair of kills by junior Meg Morningstar and a block assist by Morningstar and senior Danielle Wall. The game stayed tight until Leto reemerged with four kills to drive NA toward a 25-16 set two win. Morningstar also collected four kills in the set as she finished with five on the night.

In the third set, Spangenberg, senior Megan Hollingsworth and sophomore Natalie Costanzo launched Fox Chapel to a 13-9 lead. Hollingsworth posted four kills and Cotanzo collected three straight aces for the Foxes.  A kill by Spangenberg a few points later put FC in front 16-14, but self-inflicted wounds by the Foxes would be their undoing down the stretch. Numerous hitting errors, coupled with two aces by Carol Li and five more kills by Leto finished off Fox Chapel for a 25-21 Tigers win in the third and final set.

With the win, North Allegheny advances to 4-0 overall and 3-0 in Section 3-AAA.  Fox Chapel drops to 1-3 overall and in section play. The Lady Tigers will play another section foe on Tuesday night with a tough test at Seneca Valley. Start time is slated for 7:00 pm.