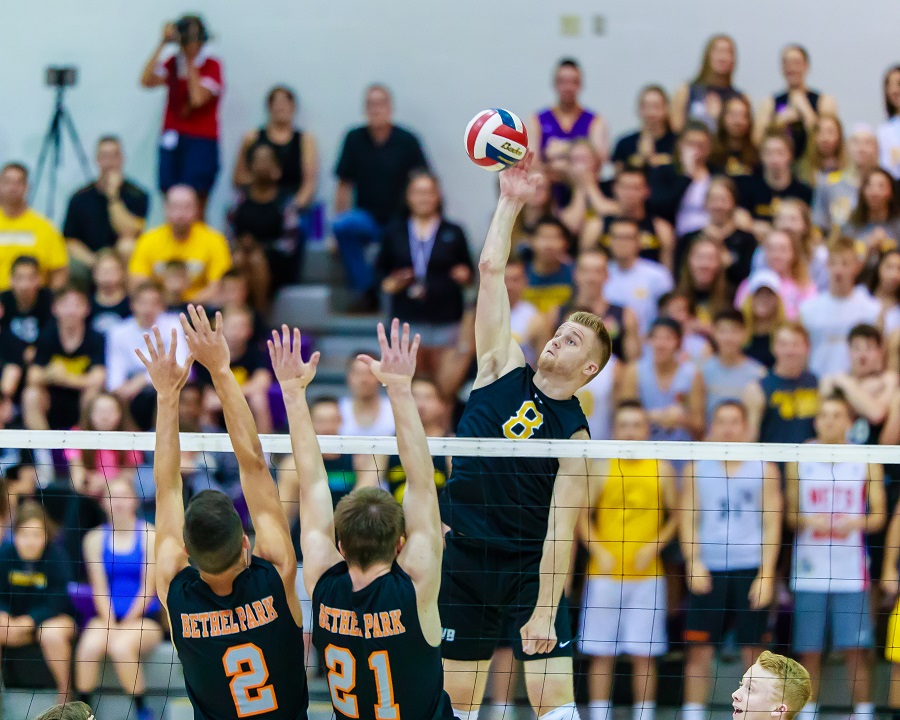 The North Allegheny boys’ volleyball team captured its second straight WPIAL title, and 19th overall, with a 3-1 win over the Bethel Park Black Hawks on Thursday night at Baldwin High School. In the process, senior Canyon Tuman became the all-time kills leader at North Allegheny with 18 on the night, giving him 1,244 for his career. Tuman surpassed the old mark of 1,232 which was held by Tommy Keisling who graduated in 2013. For his milestone performance, Tuman was named the Wright Automotive Player of the Game by the North Allegheny Sports Network.

In the WPIAL Class AAA title tilt, the Tigers were facing a Bethel Park team with an identical 18-0 overall record and a No. 5 ranking in the state. NA entered the contest as the fourth-ranked team by the PVCA. North Allegheny used the swings of Tuman to explode onto the scene in the first set, claiming a 25-19 win. Tuman posted five kills in the set.

In set two, Bethel Park did something in match play that no one else has accomplished all season and beat the Tigers, 25-23. The Black Hawks trailed 11-6 and seemed destined to fall behind 2-0 in the match score, but BP rallied back thanks to big swings of John Cooley who finished with 14 kills.

Bethel Park had North Allegheny on the ropes again in the third set and were deadlocked with the Tigers, 16-16. However, Tuman and Jake Barber took over down the stretch to propel the Tigers to a 25-22 win. Barber totaled nine kills on the night.

North Allegheny never gave Bethel Park a chance in the fourth and final set en route to a convincing 25-14 win to cap off a 3-1 triumph. Senior Jason Stiefvater led the charge in the final set and finished with 16 kills. Junior Alex Zubrow was also strong at the middle of the net with numerous kills and blocks. The match fittingly came to an end on a kill by Tuman on his historic night.

Tuman was named the WPIAL Class AAA MVP prior to the game, while Stiefvater and setter A.J. Schmidt were named first team All-WPIAL. Zubrow received third-team honors. For a complete list of the Class AAA All-WPIAL team, click here.

With the win, North Allegheny improves to 19-0 overall. The victory over Bethel Park was the seventh time in the last eight seasons that NA has defeated the Black Hawks in the postseason. Bethel Park slips to 18-1 overall. Both teams advance to the PIAA tournament next week.