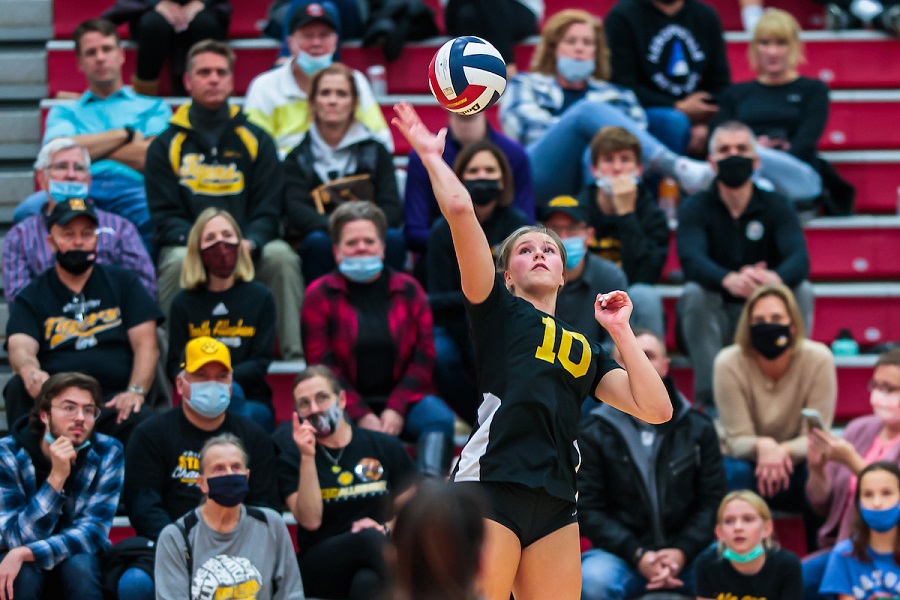 The North Allegheny girls’ volleyball team rolled to a 3-0 sweep of the Norwin Knights in non-section play on Wednesday night. The Tigers earned the win by set scores of 25-9, 25-20 and 25-9.

The contest pitted two storied programs with a combined 23 WPIAL titles and 20 PIAA crowns between them. The five-time reigning state champion Tigers had little trouble with the Knights in the first set and cruises to a 25-9 win. Junior middle blocker Ariana Schiller tallied two kills and two blocks in the set and senior Carissa Treser posted three of her nine kills on the night in game one.

The second set was far different with four ties and three lead changes. It appeared NA might dominate the action after four consecutive aces by senior Mia Tuman gave the Tigers a 4-0 lead. Later in the set with NA on top 11-7, Norwin went on an 10-1 run to take a 17-12 advantage. Senior Kate Botti sparked the run with three aces and senior Maddie Kessler added two more aces. Undaunted, NA answered back with a 5-0 run to even the score at 17-17 thanks to three kills by Treser. However, a 3-0 spurt by Norwin leapfrogged the Knights in front, 20-17. Following a time out by head coach Russ Hoburg, North Allegheny responded with a crucial 8-0 run to not only regain the lead but to also close out a 25-20 victory.

The momentum gained in the second set carried over into the third as the Tigers breezed to a 25-9 triumph. Senior Ella Deeter notched four of her team-high 14 kills in the final set. A consistent source of offense throughout the night, to go along with six digs defensively, Deeter was named the Wright Automotive Player of the Match.

North Allegheny sits at 2-0 overall following the victory, while Norwin dips to 0-2. Up next for the Tigers is a tough non-section contest on Tuesday at Shaler.