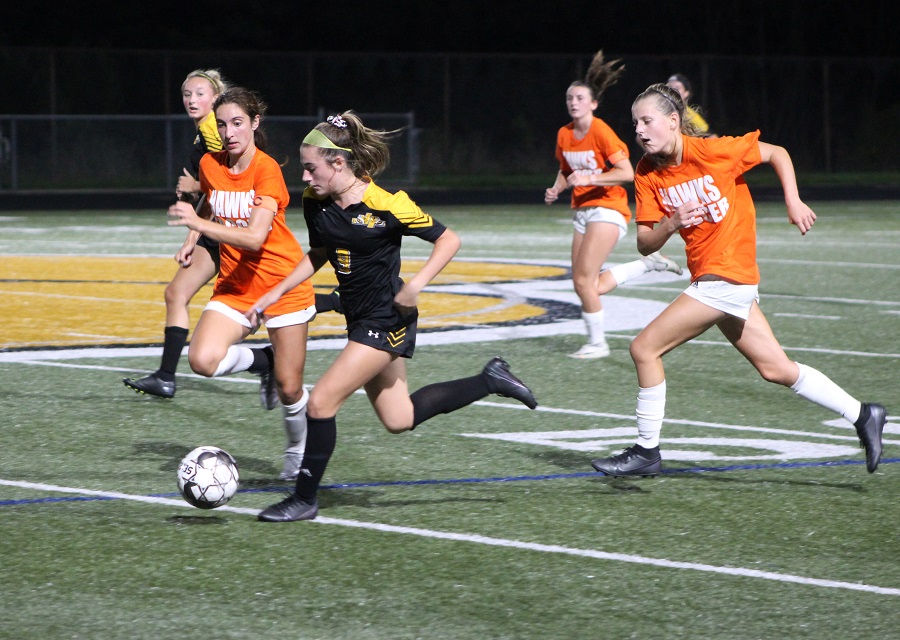 After beating Norwin in the 2019 WPIAL Championship, it clinched the Lady Tiger’s first ever WPIAL title. The result was the same in the 2020 regular season with North Allegheny defeating Norwin 2-1 in overtime, Saturday afternoon at Newman Stadium.

North Allegheny started hot offensively, with Lucia Wells getting a break away early on but wasn’t able to beat Norwin keeper Liz Waszkiewicz and the score remained 0-0. Everything went the Tigers way until 23:51 remained in the first half when a bouncing ball in the box found Lacey Bernick’s foot and she was able to finish to give Norwin the 1-0 lead. Both defenses stood strong and we went into the half with Norwin up 1-0.

Norwin had the momentum to start the second half but fouls haunted the Lady Knights as they gave up multiple free kicks, the most dangerous one from 45 yards out where Sarah Schupansky put it into the box, after a couple misplays from Norwin defenders Abby Stager picked up her first career goal and tied the game 1-1 with 32:11 remaining in regulation. The momentum began to shift in the Lady Tigers’ favor but they were continuously turned away by Waszkiewicz and we were heading to overtime tied 1-1.

In the first five minutes of overtime Schupansky got a shot on net that was saved but a juicy rebound landed on the foot of Wells who was also denied by Waszkiewicz and we continued to play in the overtime period. Finally, with four minutes remaining in the first overtime, after a frustrating day of great saves and offsides calls, Wells finally got behind the defense onside, and buried the breakaway goal to give the Lady Tigers a 2-1. For her efforts, Wells was named the Wright Automotive Player of the Game with the game-winning goal and multiple scoring chances.

North Allegheny improves to 2-0 overall. Norwin falls to 1-2. Next up for the Lady Tigers will be a matchup with Pine-Richland Monday at 7:30 p.m. at Newman Stadium. This game will be broadcast live on the North Allegheny Sports Network.