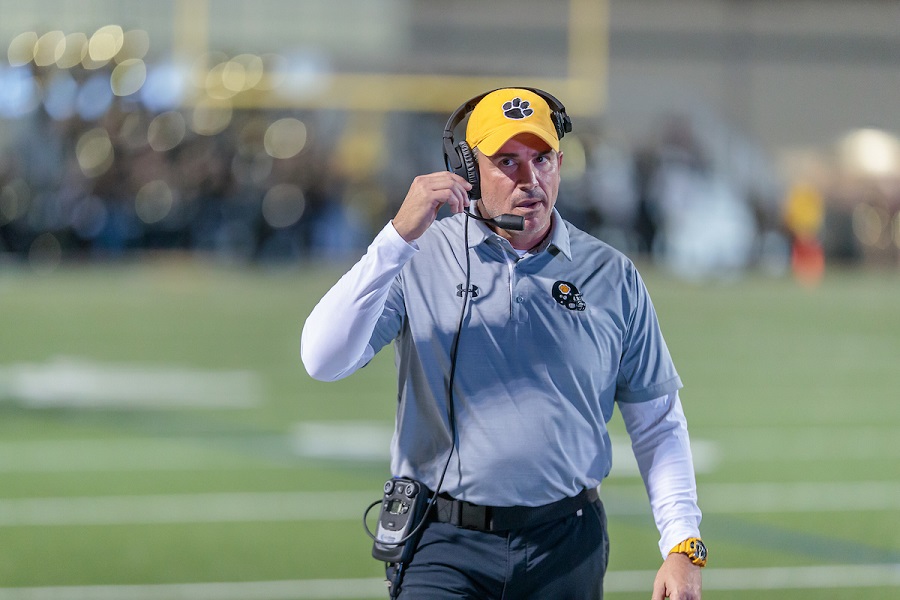 The North Allegheny Tigers maintained their unblemished record with a 33-14 non-conference win over West Allegheny on Friday night at Newman Stadium. In the process, head coach Art Walker became the all-time wins leader at North Allegheny with his 145th win. Walker is in his 15th year as head coach of the Tigers and surpassed Jim Rankin, who won 144 games in 18 seasons at NA and retired in 2004.

Coming off a 62-point performance against Hempfield last week, the North Allegheny offense picked up where it left off and took the opening possession 65 yards for the game’s first score. On the fifth play of the drive, senior Luke Colella scampered into the end zone on a 24-yard run for a prompt 7-0 lead.

The score remained 7-0 until the Tigers struck again with 7:40 remaining in the second period as senior Percise Colon capped a five-play, 59-yard drive with a 6-yard touchdown run to improve the NA lead to 14-0.

With a little over two minutes remaining in the first half, senior quarterback Ben Petschke led a swift and effective two-minute drill for another score. On a 3rd and 15 from the 50-yard line, Petschke hit junior receiver Mason Kress with a 40-yard pass to the WA 10-yard line. On the following play, Petschke tossed a 10-yard touchdown pass to Colella with 21 seconds left in the half for a 20-0 lead. Petschke completed 7 of 10 passes for 109 yards and a touchdown.

In the third quarter, Colon scored on another 6-yard touchdown run with 6:30 on the clock for a 27-0 NA advantage. From there, the Tigers cruised to their ninth win of the season.

West Allegheny broke the shutout with a 12-yard touchdown pass by Kam Kruze to John Rink with 1:45 remaining in the third quarter, trimming the NA lead to 27-7.

The North Allegheny reserves picked up another touchdown when quarterback Greg Phillips scored on a 4-yard run to balloon the score to 33-7, Tigers, with 8:03 to play in the fourth quarter.

The Indians capped the scoring with 5:06 to play on a 15-yard touchdown run by Tommy St. Claire to bring the final score to 33-14, North Allegheny.

As is typical of the Tigers, numerous players shined in the victory. Fullback J.P. Cantu was the game’s leading rusher with 82 yards on just three carries. Sophomore Kolin Dinkins added 68 yards on six totes. Defensively, Brayden Prekop tallied three tackles, two for a loss, and one sack to earn Wright Automotive Player of the Game honors.

For West Allegheny, sophomore quarterback Gavin Miller completed 12 of 19 passes for 103 yards. His top target was Rink, who finished the night with eight catches for 82 yards and a touchdown.

North Allegheny improves to 9-0 on the season, while West Allegheny falls to 3-5 overall. The Tigers will visit Pine-Richland next week with a playoff bye at stake in the upcoming WPIAL playoffs. The Indians hope to lock up a playoff berth as they host Moon next week.