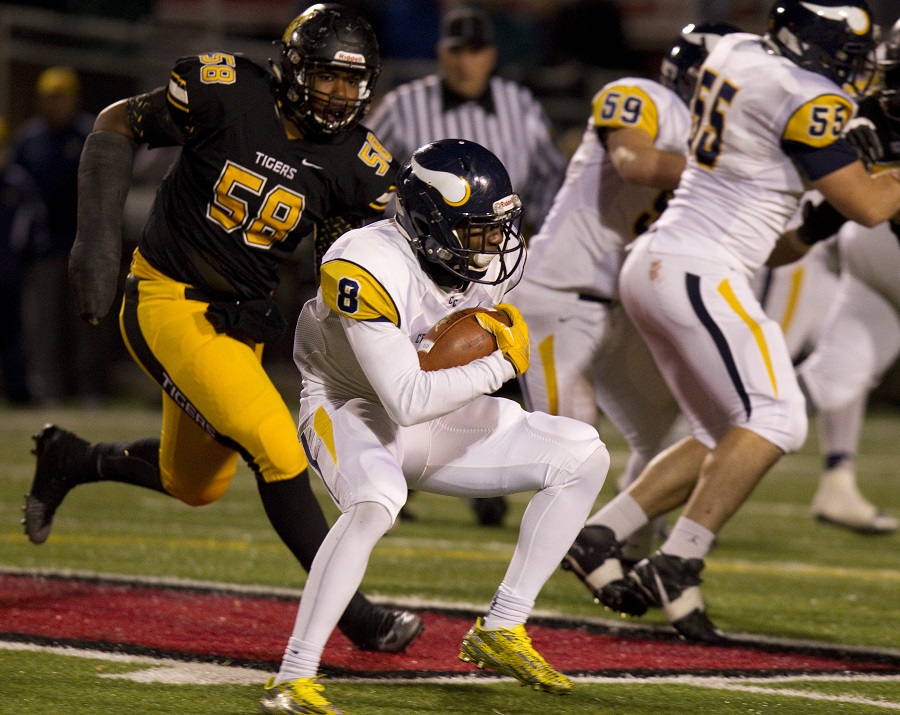 Central Catholic forced three second-half turnovers and Ronnie Jones rushed for 144 yards and two touchdowns as the fifth-seeded Vikings defeated the fourth-seeded North Allegheny Tigers, 31-17, in the WPIAL quarterfinals on Friday night. On a cold and blustery night at Martorelli Stadium, the Vikings were able to avenge their only loss of the season and grabbed a 7-0 lead on a 2-yard run by Jones with 2:17 to play in the first quarter.

The lead didn’t last long as North Allegheny promptly answered back with a 50-yard touchdown run by Ethan Maenza to tie the score at 7-7 with 47 seconds remaining in the opening stanza. Maenza finished the night with 129 yards rushing and completed 12 of 22 passes for 143 yards through the air.

On the ensuing possession, Central Catholic marched 80 yards on five plays and capped the drive with a 3-yard touchdown run by quarterback Troy Fisher to regain the lead, 14-7. The drive was sparked by a 65 yard run by Bricen Garner to the NA 3-yard line that set up the Fisher score.

Later in the second quarter, Damar Hamlin returned a punt 37 yards to the NA 9-yard line to put the Vikings in position to expand the lead. The North Allegheny defense didn’t budge and Central Catholic settled for a 21-yard field goal by Jacob Rocchi and a 17-7 lead with 4:10 remaining in the first half. The Tigers responded with a 13 play, 57-yard drive that resulted in a 40-yard field by Seth Mancuso that trimmed the Central Catholic lead to 17-10 with 1:13 before halftime. The Mancuso field goal was a strong kick into a stiff breeze that had plenty of room to spare.

On the ensuing kickoff, Hamlin struck again for a big play and returned the football 74 yards to the NA 24-yard line. The Vikings drove to the NA 9-yard line and appeared poised to add on to their lead. However, with no timeouts remaining, Fisher ran the ball on a 2nd and goal play and was tackled for a 2-yard gain to the Tigers 7-yard line and well short of the end zone. The waning seconds expired off the clock the score remained 17-10, Vikings, at intermission.

North Allegheny marched 69 yards on 10 plays on its next possession, but the Tigers were turned away on a fumble at the CC 5-yard line that was recovered by Hamlin. With the Vikings pinned back, the Tigers forced their conference rival to punt and junior Michael Pope returned the ball 16 yard to the CC 19-yard line. Two plays later, the Tigers found the end zone on a 17-yard scamper by Riley Trueman and the Central Catholic lead was cut to 24-17 with 51 seconds left in the third quarter.

Central Catholic regained its two-touchdown advantage on its next possession, an 80-yard drive that culminated with an 8-yard scoring run by Jones with 7:57 to play in the fourth quarter. The Jones run gave the Vikings a 31-17 lead and the Central Catholic defense preserved it by forcing another NA fumble on the next drive to put the game away.

Despite the loss, it was valiant effort by the Tigers with several fine performances. One player who stood out on defense was Niko Mermigas who delivered several key pass break ups and one interception. For his efforts, Mermigas was named the Wright Automotive Player of the Game by the North Allegheny Sports Network.

Central Catholic improves to 10-1 on the season and advances to face the Woodland Hills Wolverines in the WPIAL semifinals. North Allegheny’s campaign concludes with a 9-2 record. Congratulations to the Tigers football team and coaching staff for another memorable season.