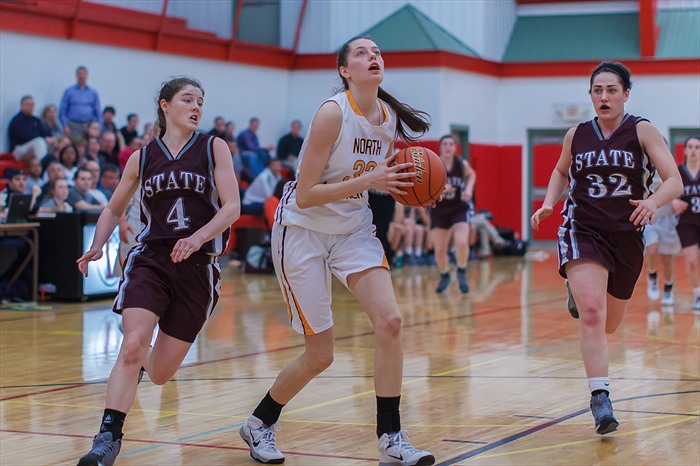 For the second straight game in the PIAA playoffs, North Allegheny led from start to finish as the Lady Tigers topped the District 6 champion State College Lady Lions on Tuesday night, 58-44, from Indiana High School.  The win sets up a rematch with the Hempfield Spartans in the PIAA quarterfinals on Friday night.

Against State College, the Lady Tigers pounced on the Lions for a quick 7-0 lead.  However, State College answered with an 8-1 run to trim the NA advantage to 9-8 in the early stages of the second period.  After a timeout by head coach Sherri McConnell, North Allegheny tore into the Lions for a 16-3 run with a defense that tortured their foe throughout the remainder of the night. North Allegheny forced State College into 23 turnovers and claimed 15 steals with a ferocious full court press. Leading the charge was Abby Gonzales who posted team highs in scoring, steals and assists.  The sophomore guard tallied 18 points, five steals and five assists.  For her efforts, Gonzales was named the Wright Automotive Player of the Game.

In their PIAA opening round win over Mt. Lebanon last week, State College saw big nights from forwards Kyla Irwin and Jalyn Shelton-Burleigh. Against the Tigers, Irwin scored 18 but Shelton-Burleigh was nonexistent with one point and an 0 for 5 performance from the field.

North Allegheny stretched open a 41-21 lead in the third quarter before the Lions rolled off a 10-2 run, seemingly putting State College in position for a late-game rally with two Lady Tigers in precarious position of fouling out.  The fifth foul for Taylor Brennan and Meg Morningstar never came as both players kept their poise and helped NA regain its momentum down the stretch. Along with Gonzales’ 18 points, Brennan and Morningstar added 10 points apiece in a 14 point win in the PIAA second round.

North Allegheny improves to 24-2 on the season and will look to avenge its WPIAL semifinal loss to Hempfield on Friday night at a site and time to be determined.  Friday’s game will be broadcast live via the internet on the North Allegheny Sports Network. State College finishes the season with an 18-8 record and its eighth District 6 title.