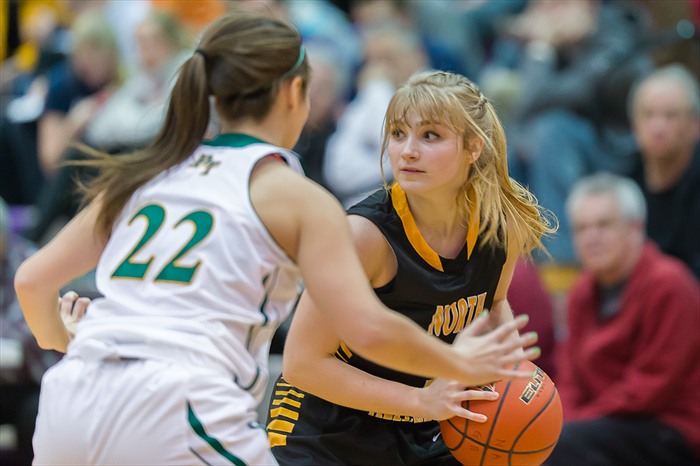 Lady Tigers Roar Past Penn-Trafford In PIAA First Round

Determined to bounce back from a disappointing loss to Hempfield in the WPIAL semifinals, the North Allegheny Lady Tigers punished the WPIAL champion Penn-Trafford Warriors, 64-39, on Friday night in the opening round of the PIAA playoffs. The Tigers led wire to wire, dictating the pace with a fiery defense and quick-footed transition game.  The more methodical Warriors were never able to settle into their controlled style of play that was used to great success on their trek toward a WPIAL title.

With some of the Lady Tigers sporting the mottos “Bounce Back” and “Prove It” written on their wrists, North Allegheny unleashed a trapping defense that forced 19 turnovers and collected 13 steals.  Sophomore Abby Gonzales and junior Meg Morningstar hauled in a combined nine steals, and senior Taylor Brennan played inspiring defense as NA limited Penn-Trafford to below 40 points for just the third time this season.  Playing collapsing, team defense was a key component in the Tigers efforts in holding PT’s top scoring threat, Maria Palarino, to only 11 points.

While the defense kept the Warriors under wraps, North Allegheny jumped out to a 13-4 and 21-11 lead before PT fought back late in the first half with a pair of threes by Emma Mull and Kaila Simcoviak to narrow the gap to 25-17 at intermission. Despite PT’s brief jolt prior to halftime, the Lady Tigers pulled away with 39 second-half points, many of them coming courtesy of the three-point prowess of Devvin LaBarge. The junior guard poured in a game-high 22 points and connected on 6 of 8 shots from beyond the arc. For her efforts, LaBarge was named the Wright Automotive Player of the Game by the North Allegheny Sports Network.

Joining LaBarge in double figures was Brennan with 13 and Gonzales with 10. Sophomore Taylor Lake chipped in with eight points and seven boards. For the Warriors, along with Palarino’s 11 points, junior Casey Aunkst did her best to keep PT in the game with 10 points and four assists. Junior forward Katy Abreu posted seven points and five rebounds, but was in foul trouble for much of the night.

Living up to their rallying cry, the Lady Tigers indeed bounced back on Friday night and proved their worth as one of the top teams in the state. North Allegheny improves to 23-2 and earns a second round meeting with the State College Lady Lions on Tuesday night at a site and time to be determined.  Penn-Trafford’s season ends with a 20-7 record and a WPIAL crown.