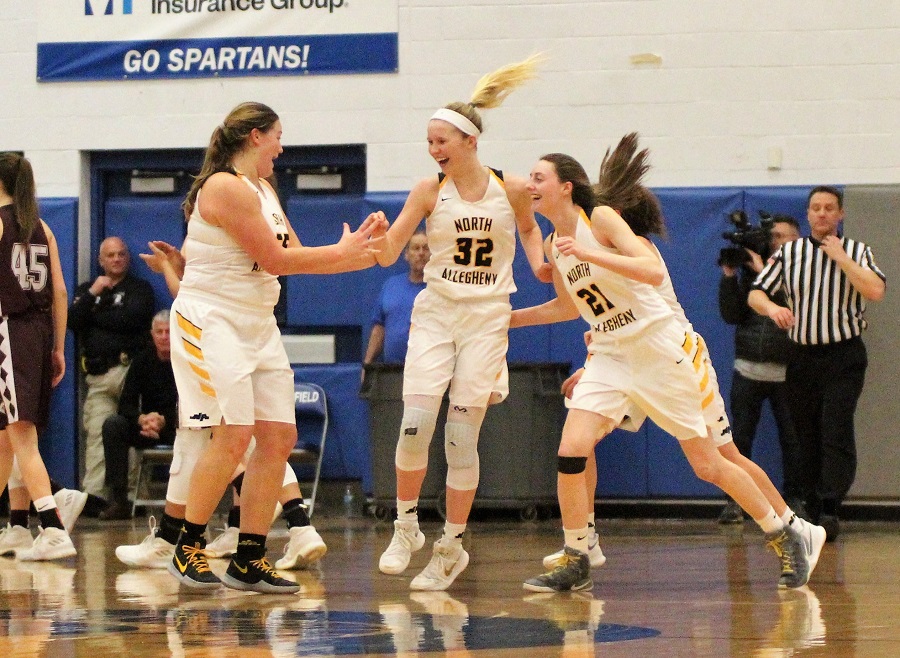 The North Allegheny Tigers entered their playoff tilt with Altoona owning a perfect 26-0 record, including two victories over the Mountain Lions in the regular season. The Mountain Lions boasted a perfect 5-0 record against North Allegheny in state tournament clashes and were 20-3 all-time in PIAA second round games. In Tuesday night’s PIAA second round meeting at Hempfield High School in Greensburg, PA, something had to give and the WPIAL champion Tigers outlasted Altoona for an exciting 55-50 victory.

The game was a nip-and-tuck battle that didn’t see a lead larger than five points for the entire night, and that didn’t come until the waning seconds of the contest. The Tigers and Mountain Lions were tied 19-19 after one quarter of play and were deadlocked 27-27 late in the second quarter. North Allegheny used a 5-1 run to grab a 32-28 lead, the largest of the first half, before Altoona trimmed the score to 32-30 on a Brigid Fox layup prior to halftime.

Seniors Piper Morningstar and Madelyn Fischer led the way for NA in the first half with 13 and 10 points, respectively. Junior Brooke Barcia chipped in with a pair of important 3-pointers off the bench. Altoona was kept float thanks to junior Olivia Hudson’s 12 points. 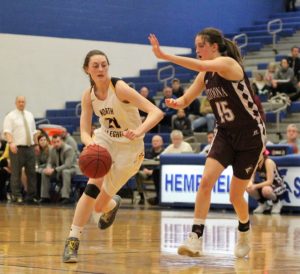 In the second half, it was more of the same as North Allegheny held a narrow 40-39 advantage after three quarters. The Tigers opened up the lead to 43-39 early in the fourth quarter on a Morningstar 3-pointer, her fourth of the night. The Radford University committ finished with a team-high 21 points.

Altoona refused to go away and stayed within striking distance thanks to the play of Hudson and Fox. Hudson totaled a team-best 21 points for the Mountain Lions and Fox added 11 points.

Leading 47-46 with three minutes to play, North Allegheny slowed the pace and improved the lead to 49-46 on a layup by Fischer, assisted by Morningstar. Fischer posted a double-double with 17 points and 12 rebounds, collecting nine offensive boards. The Seton Hill commit was an efficient 8 for 12 shooting from the field and earned Wright Automotive Player of the Game honors.

The Mountain Lions cut the score to 49-48 on a Hudson layup with just over a minute remaining. That’s when freshman Lizzy Groetsch took a tenuous lead and solidified it for a Tigers victory. Groetsch connected on two free throws with 60 seconds remaining to bump the NA advantage to 51-48. The freshman phenom went on to knock down four more free throws in the final minute to preserve a 55-50 triumph for the black and gold. Groetsch was a perfect 8 for 8 at the charity stripe on the evening.

With the victory, North Allegheny improves to 27-0 overall and will take on the Bethel Park Black Hawks in the PIAA quarterfinals on Friday night at a site and time to be determined. The game will be broadcast live via the internet on the North Allegheny Sports Network. For the Altoona Mountain Lions, their season comes to an end with a 21-5 overall record. Of their five losses, three were to North Allegheny.