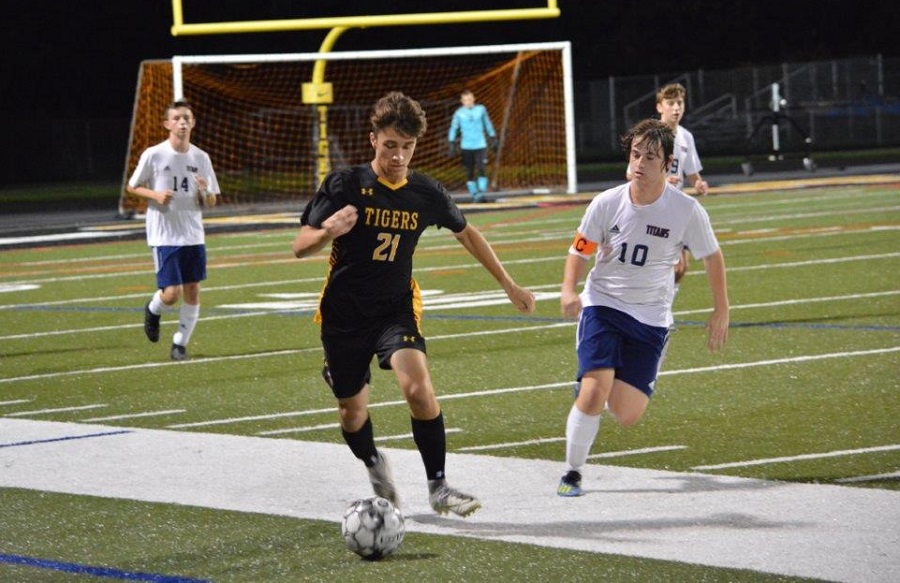 The North Allegheny boys’ soccer team cruised to an important section win as the end of the regular season approaches.  Four different Tigers netted goals on the night while Shaler scored one for themselves and for NA, in an 8-1 Tiger victory.

An adjustment to the starting lineup in the attack paid immediate dividends a little more than two minutes into the match.  A beautiful through ball played by senior center-mid Nick Bridges found junior forward Will Cinker beating the defense, charging from the left.  Cinker drew the goalie out before placing a rolling cross to the right where junior forward Luke Anderson banged home the first of his three goals on the night at 37:56 remaining in the first half.  Approximately seven minutes later Cinker was on the receiving end of a perfectly placed cross from junior midfielder Johnathan Ross.  Cinker buried the ball low into the bottom right corner of the net at 30:10, on the first of his two goals on the evening.  The balance of the half had multiple good scoring opportunities exceed the Tigers reach and the half ended with NA up 2-0.

As the second half began, junior midfielder Jack Walsh found himself uncovered on several occasions on the back post with two good scoring opportunities from in tight.  Shaler goalkeeper Zane Kissel denied both, until the third one where Walsh attempted a cross from near on the right post that caromed off a Titan defender and into the back of the net for an own goal, putting NA ahead 3-0.  Shortly after, Ross possessed the ball with deep penetration on the left and once again delivered a well-placed cross in the box.  Senior forward Sam Wilson was appropriately waiting on the back post, tapping the fourth Tiger goal into the net at 29:15 of the second.

Before the goal had even been announced, eight seconds later junior midfielder John Ross found Anderson for his second goal of the match, driving a left-footed strike that flew top left into the net, putting the Tigers ahead 5-0.  The Titans registered their only goal of the night on a penalty kick with 13.51 remaining.  Junior defender Ryan Schwartz fouled Shaler junior forward Sam Bens in the penalty area.  Bens then struck the PK off the top right corner of the frame that ricocheted past senior goalkeeper Grant Baierl to trim the score to 5-1.

The mark was quickly countered when at 13:14 Anderson chipped an arching cross to Cinker who banged in his second goal with a clean header past the Shaler goalie, making the score 6-1.  Twenty seconds later Anderson secured the hat trick on great feed from junior Sam Passodelis.  Scoring closed at the 8:22 mark when Passodelis served up another precise assist, this time to junior Sam Maldia, making the final score 8-1, NA.

On the night the Tigers had the edge in shots on goal, 18-3, corner kicks 6-1 and possession time, 28 minutes to 19 minutes.  The Tigers take on another important section game this Thursday at Newman Stadium against the Pine Richland Rams. The game will be broadcast live by the North Allegheny Sports Network.