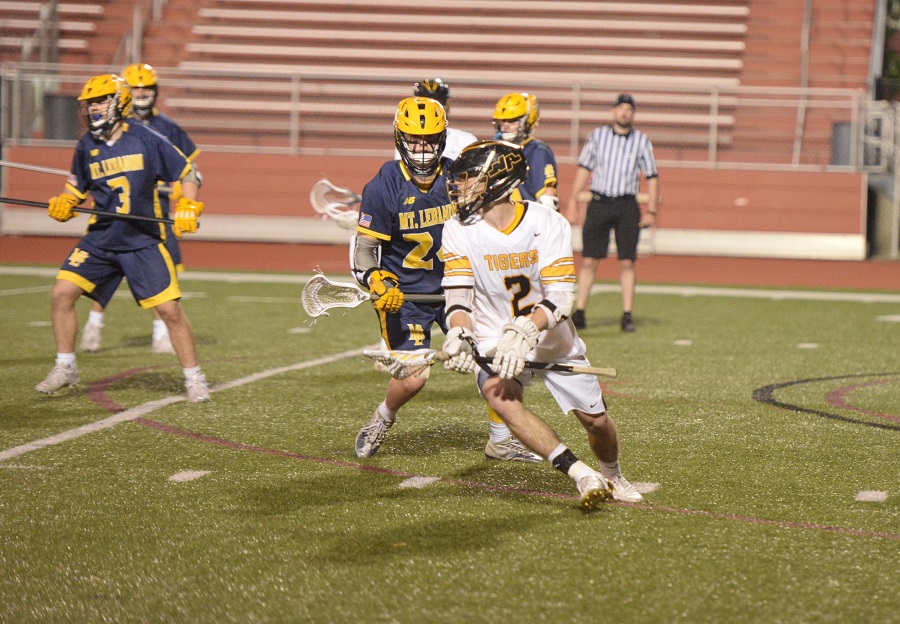 Mt. Lebanon scored five goals in the fourth quarter to claim a 10-8 victory over North Allegheny in the WPIAL Class AAA semifinals on Monday night at Moon High School. It was another classic back-and-forth playoff battle between the two schools that saw six ties and five lead changes before a victor could be determined.

Monday night’s contest marked the sixth time in the last seven seasons North Allegheny and Mt. Lebanon played each other in the WPIAL playoffs. Six of those games, including Monday’s, were determined by margins of two goals or fewer.

In the first quarter, the fourth-seeded Blue Devils struck first on a goal by junior John Sramac with 8:00 on the clock for a 1-0 lead. The Tigers responded with a marker from junior Isaiah Davis just 46 seconds later to even the score at 1-1. Senior Ben Maenza and Davis tallied two more goals for a 3-1 lead with 1:17 remaining in the opening stanza. Mt. Lebanon closed the gap to 3-2 on a goal from Daniel Kovalan with 34 seconds to play in the quarter.

Mt. Lebanon netted the only two goals of the second quarter, one from Blake Nelson and another from Brodie Campbell, to grab a 4-3 lead by halftime.

Davis notched a hat trick with his third goal of the night just over a minute into the second half to knot the score at 4-4. Nelson put Mt. Lebanon back on top at 5-4 with 9:30 to go in the third quarter before a final-minute barrage by the Tigers swayed the momentum. North Allegheny tallied three goals in the final 1:13 of the third quarter to leapfrog ahead, 7-5. Senior Matt Osten scored back-to-back goals and senior longstick Antonio O’Barto seemingly stunned the Blue Devils with a goal with 0.8 seconds remaining in the third for a two-goal lead.

While it appeared the Tigers may have gained control of the contest, Mt. Lebanon swung the pendulum back in its direction with a marker by Joe Gibbons just 15 seconds into the fourth quarter to trim the score to 7-6, Tigers. The Gibbons goal opened the floodgates as the Blue Devils netted five of the final six goals on the night.

Matt Vines tied the game and Sramac pulled Mt. Lebanon ahead, 8-7, with 7:23 to play in regulation. Davis tallied his fourth goal of the game with 5:56 left to tie the game at 8-8. For his four-goal performance, Davis was named the Wright Automotive Player of the Game.

Kovalan and Jack Sullivan netted the final two goals of the game, the last of which with 3:57 remaining to secure a 10-8 victory and a berth in the WPIAL championship game on Friday night. The Blue Devils will take on second-seeded Pine-Richland in the title tilt.

North Allegheny’s season concludes with a 14-4 overall record.  Congratulations to the coach John Rullan and the NA boys’ lacrosse team for another successful and memorable season.