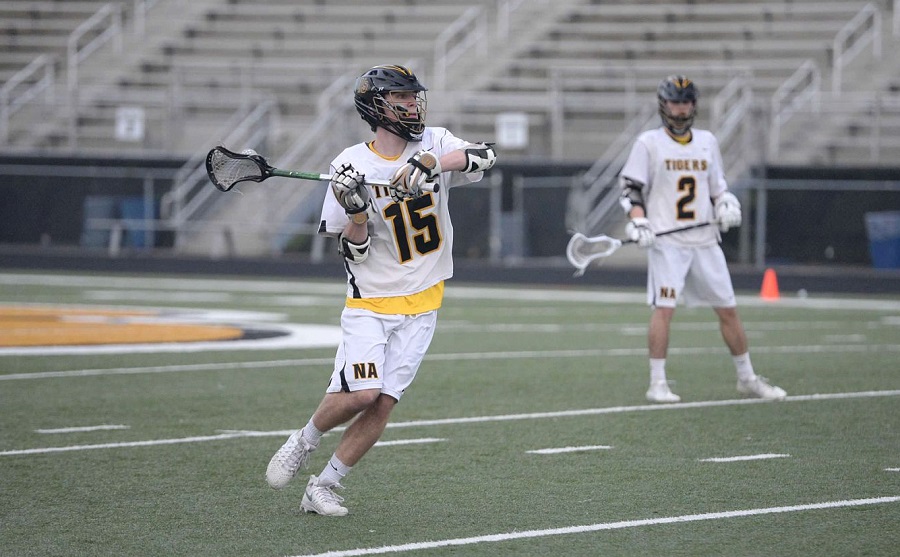 Peters Township broke a 7-7 tie in the fourth quarter with back-to-back goals from Aiden Stopperich and Daniel Bacchiochi to propel the Indians to a 9-7 victory over North Allegheny and a second straight WPIAL Class AAA boys’ lacrosse championship. The Tigers were making their third appearance in four years in the title game with one WPIAL championship in 2016.

The Indians received a hat trick from senior and Wheeling Jesuit commit Colton Abate. The Tigers’ Kyler Byerly and Matt Osten each notched a hat trick.

North Allegheny and Peters Township traded goals in the opening stanza to the tune of a 2-2 tie. The Tigers received goals from Byerly and sophomore Nick Kairys while the Indians’ Aiden McCall and Abate tallied markers.

The reigning WPIAL champions began to dictate the pace of the game in the second period and struck for three straight goals for a 5-2 lead with 4:40 to play in the half. Abate, senior Benjamin Delaney and senior Nicky Phelps scored during the three-goal spurt. Phelps, a U.S. Lacrosse All-American, spearheaded the effort by consistently winning draws at the faceoff X throughout the afternoon.

Osten gave the Tigers some brief momentum with back-to-back goals, the second of which coming with 2:30 left in the first half, to trim the score to 5-4, Indians. Peters Township regained its two-goal edge on a man-up goal by Abate with 49 seconds before intermission. The Indians were 1-for-2 on man-up situations while the Tigers were 0-for-3.

Peters Township continued to dominate time of possession in the third quarter before Byerly managed to muscle his way in for a short-range North Allegheny goal with 4:53 on the clock to bring the score to 6-5, Indians.

Bacchiochi answered with a goal a little over a minute later and the Peters Township lead swelled back to two at 7-5.

With eight seconds remaining in the third period, Peters Township turned the ball over deep in the NA zone. North Allegheny sophomore Judd Powell heaved an 80-yard pass to Byerly who beat the buzzer with a shot and the Peters Township lead was cut to 7-6. For his stunning play at the end of the third, and posting a hat trick, Byerly was named the Wright Automotive Player of the Game.

Osten found the equalizer for North Allegheny with 8:21 to play for a 7-7 deadlock. That set the stage for Stopperich and Bacchiochi who put Peters Township ahead to stay, 9-7. The two Peters Township goals came within 31 seconds of each other, the second of which with 6:08 to play.

With the win, Peters Township improves to 19-3 overall. North Allegheny falls to 13-8 on the season. Both teams qualify for the PIAA playoffs next week.