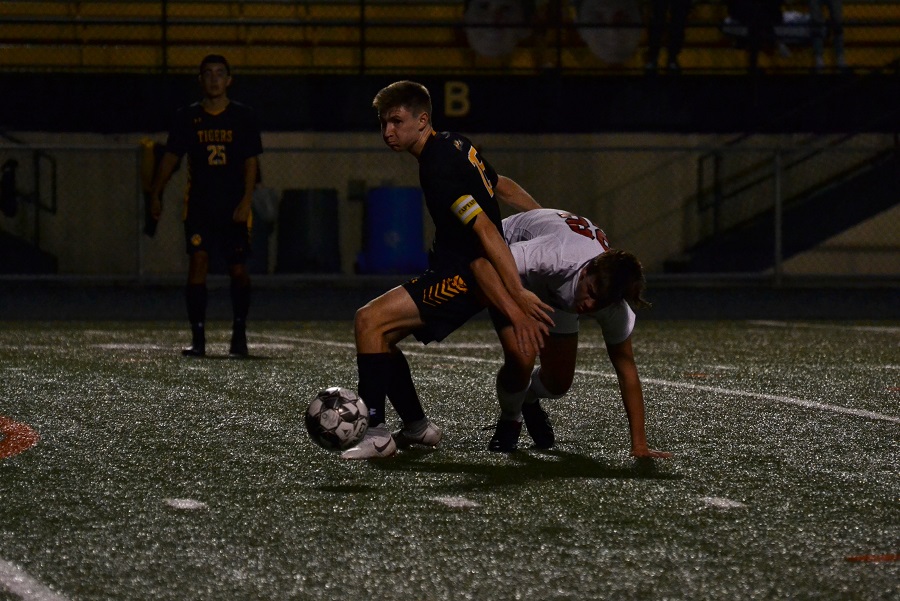 In a battle of two teams vying for a playoff spot out of Section 1-AAAA, the North Allegheny Tigers dropped a 1-0 decision to Fox Chapel on Thursday night. The Tigers had defeated Fox Chapel earlier in the season by the same score. With a season series split, NA and Fox Chapel currently sit in a fourth-place tie for the final playoff spot with three more section games remaining.

The Foxes began the game with intense high pressure that created multiple Tiger turnovers and enabled a significant edge in possession time and quality chances early in the first half. At 36:40, junior forward Sam Passodelis generated the first shot that was handled cleanly by Fox Chapel goalie Clayton Humbert.  Shortly after, the Foxes generated multiple chances with a short-range direct free kick followed by a corner kick.  As the Tigers scrambled to defend the corner kick, an unmarked junior forward Thomas Tsai caught the Tigers by surprise with a well-placed volley to the top right corner of the net past senior goalkeeper Devon Angermeier for a 1-0 Fox Chapel lead. A few chances ensued for the Tigers with several end-to-end runs, none of which ended up finding the back of the net.  One of the best opportunities occurred at 19:47 when junior midfielder Saif Ali connected on a strong pass to a diving senior midfielder Nick Bridges.  While on the ground, Bridges re-directed the pass to junior midfielder Will Cinker who launched an arching shot that carried just inches higher than the right corner of the cross bar.  The Foxes then continued with their aggressive play, amassing several yellow cards in the half.

The Foxes seemed comfortable with the 1-0 lead, falling back into a defensive mode for most of the second half.  Senior defender Niko Hindsbo had a strong blast from 30-feet out that sailed wide of the net early in the half.  The balance of the half had the Tigers struggling to connect clean passes and penetrate the tough Fox Chapel defense.  The Tigers back line of junior Samuel Giannetti, seniors Brennan Donovan, Austin Smith and Hindsbo, once again delivered solid defense, regaining possession of the ball multiple times and feeding the midfielders during the comeback attempt.

During the match, the Tigers had a seven-minute edge in possession time, and a 7-4 advantage in shots on goal. The Foxes had the edge in corner kicks, 2-0.