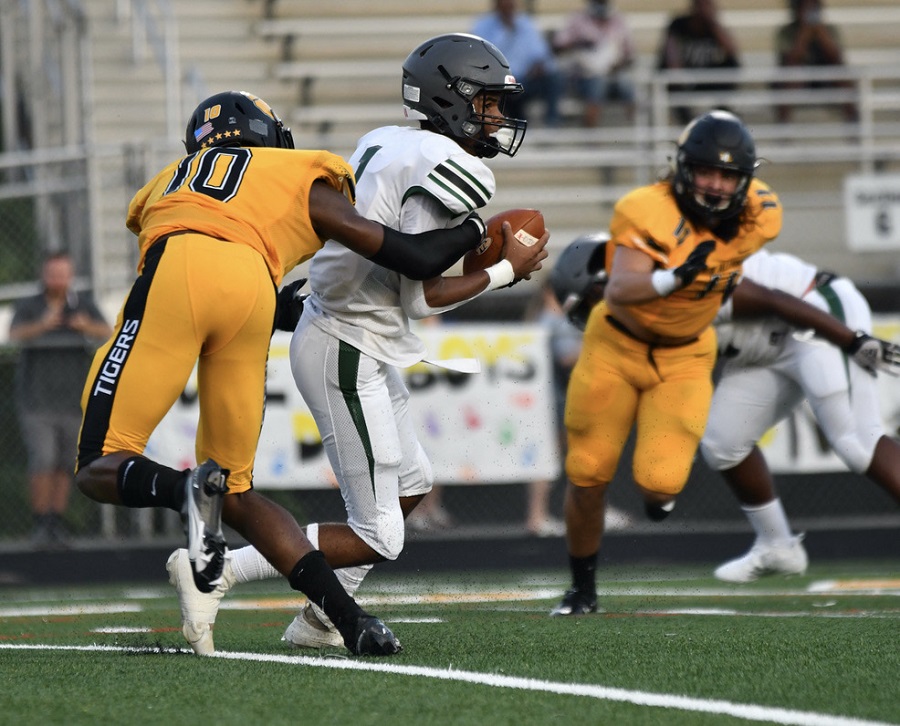 The North Allegheny defense forced four turnovers and the Tigers offense ran roughshod over the Allderdice Dragons en route to a 47-14 blowout on Friday night at Newman Stadium. Senior Luke Rumpler and sophomore Tyree Alualu recovered a pair of fumbles, while Alualu and Kyrell Hutcherson added a pair of interceptions, all in the first half, to spark a one-sided victory in Week Zero.

Early in the first quarter, a blocked punt set the Tigers up for a short field at the Allderdice 22-yard line. Faced with a 4th and 9, senior quarterback Tanner Potts set up a middle screen to receiver Khiryn Boyd for a 21-yard touchdown and an immediate 7-0 lead. Adding a rushing score later in the half, Potts was named the Wright Automotive Player of the Game.

Following an Alualu fumble recovery at the Allderdice 33-yard line, running back Andrew Gavlik rushed for a 3-yard touchdown with 3:01 on the first quarter clock for a 14-0 lead. Moments later, an Alualu interception helped set up a 5-yard touchdown run by sophomore quarterback Logan Kushner and the lead swelled to 21-0 by the end of the opening stanza.

North Allegheny scored three touchdowns in the second quarter to blow the game wide open. Kushner heaved a 61-yard scoring strike to a wide-open Hutcherson for a 27-0 lead. Junior Harron Lee sprinted to the end zone on a 9-yard sweep and Potts added a 2-yard scoring run with 2:41 remaining before halftime for a 41-0 lead. Allderdice cracked the scoreboard with 26 seconds left in the half when Jaerone Parker lofted a 65-yard scoring pass to William Coleman to trim the score to 41-7, Tigers, at intermission.

The Tigers invoked the mercy rule with 8:36 to play in the third quarter on a 71-yard swing pass from Rourke Kennedy to receiver Anthony Provenzano, who escaped two throngs of tacklers, and raced to the end zone for 47-7 advantage. The Houdini-like effort by Provenzano came on a 3rd down and 17.

Allderdice rounded out the scoring in the fourth quarter courtesy of a 1-yard rushing touchdown from Robert Brown Jr. to bring the final score to 47-14, North Allegheny.

With the win, North Allegheny starts the season with a 1-0 record, while Allderdice falls to 0-1. The Tigers will visit Pickerington Central (OH) for a tough non-conference test next week at 7:00 p.m.