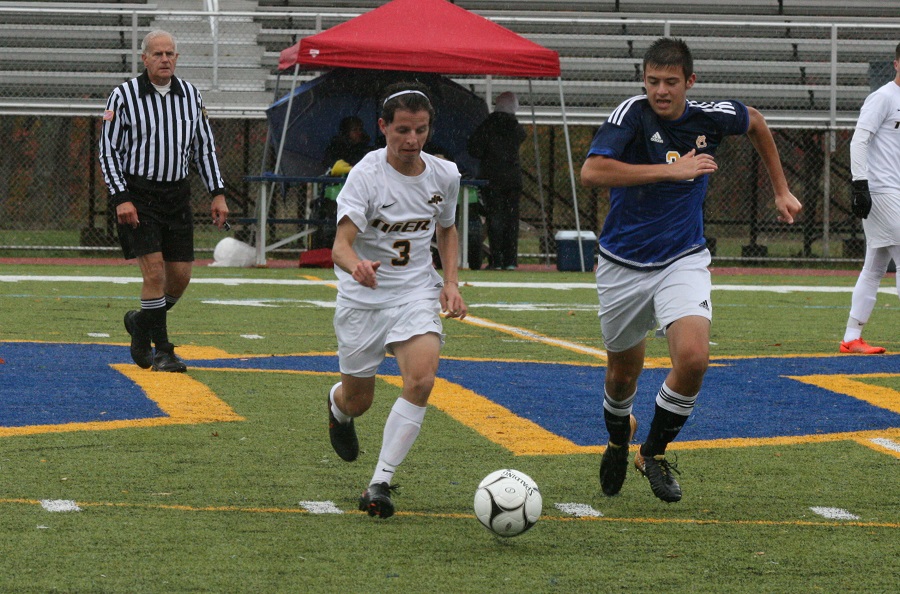 NA Pours It On Canon-McMillan In WPIAL Semifinals, 9-0

After Saturday afternoon’s rainy Class 4A WPIAL semifinal at Mars, the Tigers left little doubt as to who the better team is in 2017.

North Allegheny jumped out to a 4-0 lead in the opening 22 minutes and cruised to a 9-0 victory over the Big Macs. The triumph lifts the second-seeded Tigers into the championship game against top-seeded Peters Township either Thursday, Friday or Saturday at Highmark Stadium.

NA opened the scoring less than seven minutes into Saturday’s contest against the 11th-seeded Big Macs. Senior Ryan Earle sent a cross in front of the net where classmate Josh Luchini, a defender, and the Canon-Mac goalkeeper waited. All three went to the ground, but Luchini got just enough of the ball to steer it into the goal.

Less than 15 minutes later, the Tigers had tacked on three more goals on tallies by senior Cameron Yurick, Luchini, and senior Sean Atwater. Luchini also assisted on the markers by both Yurick and Atwater.

Early in the second half, North Allegheny removed any suspense still remaining by notching three more goals in the span of just 1:06. Luchini scored two, one off of an assist by senior Samuel Neal, and the other off of an assist by Yurick. Sophomore Jonathan Ross added the third in that spurt.

The Tigers eventually closed the scoring with two more goals in the final 12 minutes, one by junior Samuel Wilson and the other by classmate Kyle Kaczmarek. Earle and senior Ian Wilson picked up assists.

Senior Grant Glorioso played the majority of the minutes in net for NA before giving way to junior Devon Angermeier, who came on to complete the shutout.

While numerous Tigers got into the act offensively, Luchini once again led the way with his four goals and two assists. Those four markers brought his team-leading total to 32 for the season, and his efforts earned him the honor of Wright Automotive Player of the Game for the third-straight game.

North Allegheny now turns its attention to Peters Township, one of only two teams to beat the now 18-2-1 Tigers. The unbeaten Indians (17-0-1), who defeated Pine-Richland 4-1 in their semifinal contest, edged NA 2-1 at home back on Sept. 9.

Stay tuned to the North Allegheny Sports Network for the date and time of the championship game.