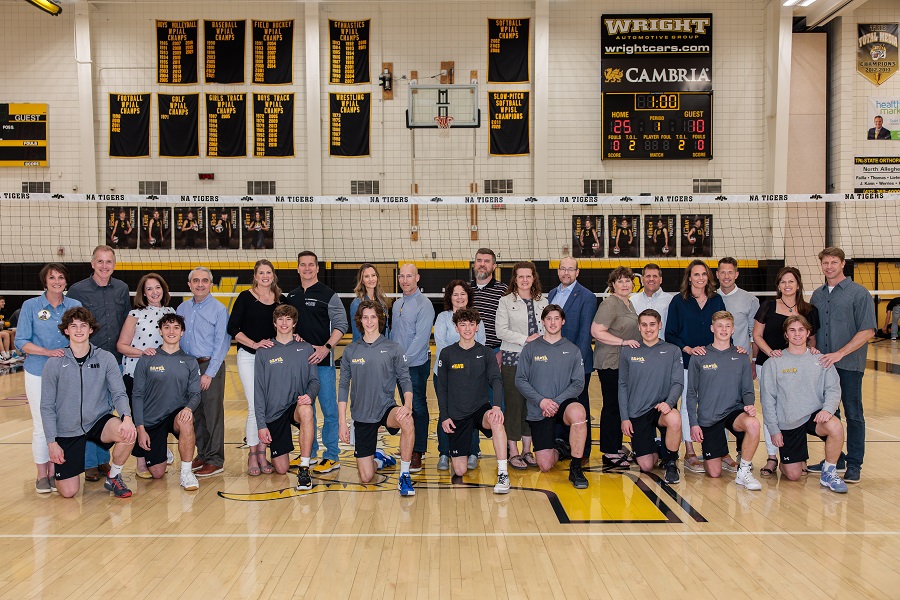 In the first set, the Tigers took an early 5-0 lead fueled by the strong play of seniors Titus LaMay, Caleb Schall and Ben Huet. Schall recorded two kills and a block in the frame, while LaMay and Huet notched three kills, and the duo of Jack Birch and Zach Birkovich teamed up for two blocks to win the set 25-12.

In set two, Fox Chapel jumped out to an 6-2 lead, but the North Allegheny climbed back into the game quickly. Back-to-back Schall kills complied with a LaMay ace brought the deficit with in one 6-5. Later Jack Birch tallied another kill to take the 9-8 lead. Schall ended the second with 4 kills and a block, Huet added three kills and block, while Senior Jake Koch nailed an ace late in the set and Jax Wilhite added a kill to seal the deal winning the second frame 25-14.

Set three started a lot like set two with a Fox Chapel 6-2 lead and once again the Tigers took little time get back into the action.  Junior Varun Kaveti started the rally with a kill, followed by a Cole Dorn ace, Schall kill, Fox Chapel net violation and Schall kill to take a 7-6 lead. Kaveti ended the third frame with four kills while Sophomore Josh Farr tallied three kills and sophomore Will Hahn recorded an ace to take the 25-14 win.

Senior Cole Dorn took home Wright Automotive Player of the Game honors for his return to the lineup for Senior Night. The all-state player has been battling an injury since the beginning of April, and his return was accompanied by standing ovations throughout the match.

North Allegheny improves to 10-0 both overall and in section play. Next, the Tigers take on Seneca Valley in a rematch of the area’s top two teams from Zelienople Tuesday night at 7:00 p.m.