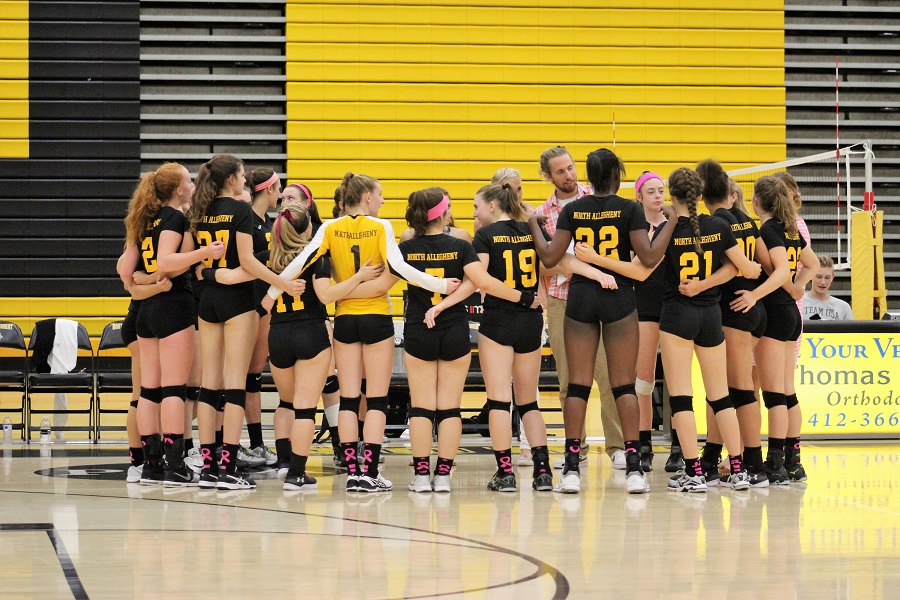 Displaying the resolve and perseverance that they have throughout the season, the top-ranked North Allegheny Tigers clinched the Section 1-AAAA title with a 3-1 victory at Seneca Valley on Tuesday night. All but one set was a nail-biter as the Tigers won the night by set scores of 25-23, 23-25, 25-13 and 25-23.

In set one, North Allegheny leaped to an 11-5 lead behind the consistent play of Avery Tuman. The junior outside hitter produced five kills in the opening set on her way to an unofficial team-high of 14 kills. Tuman was named the Wright Automotive Player of the Match.

While Tuman jump started the Tigers, Seneca Valley battled back to tie the game at 23-23. North Allegheny responded with an unreturnable serve by Mika Logan and a set-ending kill by Paige Miller to give NA a 25-23 victory.

In the second set, it was Seneca Valley who built a big lead early and grabbed a 6-1 advantage thanks to freshman Sarah White. White produced three kills in the second set and an unofficial team-high 11 kills for the Raiders. North Allegheny rallied to knot things up at 23-23 before Seneca Valley sophomore Anna DeGraaf posted back-to-back blocks to hand the Raiders a 25-23 victory.

In contrast to most of the match which was hotly contested, set three was a runaway with North Allegheny claiming a 25-13 triumph. Junior Anna Sprys was spectacular in the set and delivered four kills and two blocks to help NA to the win. Logan chipped in with three kills.

The Raiders constructed a 22-16 lead in the fourth set and seemed poised to force a fifth and decisive set. However, North Allegheny rolled off an 8-0 run to take a 24-22 lead. Despite a block by DeGraaf that trimmed the NA lead to 24-23, the Tigers won the match on a Seneca Valley foul and claimed a 3-1 win.

North Allegheny remains undefeated on the season and improves to 12-0 overall and 8-0 in Section 1-AAAA. Seneca Valley, who has already clinched a playoff spot, dips to 5-3 in the section.