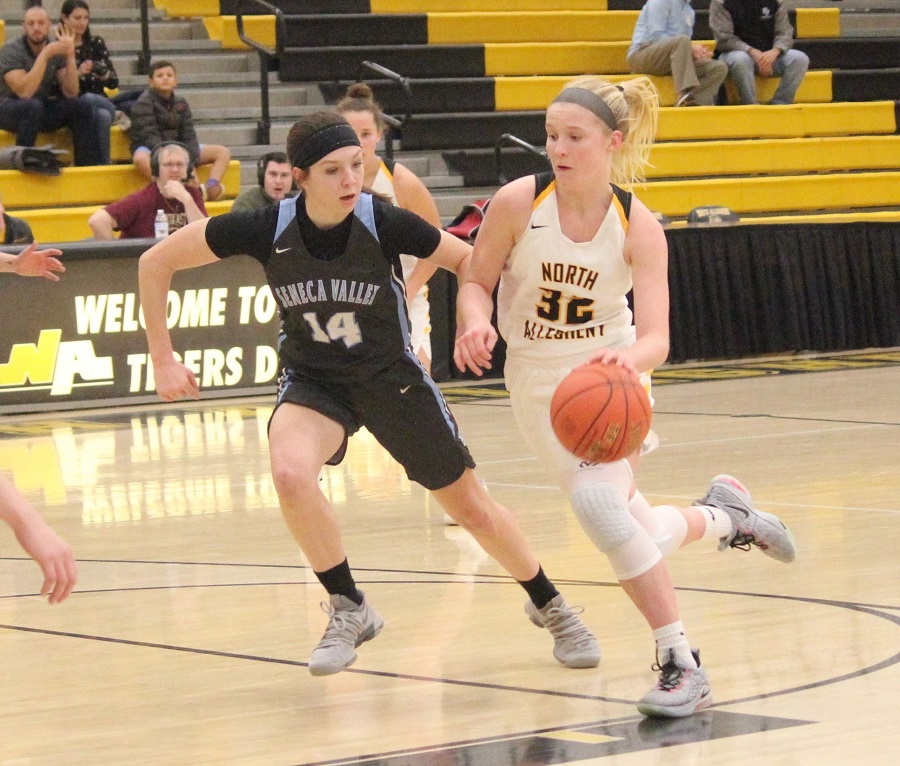 The Tigers were flying high to begin the contest, knocking down 3 of their first 4 attempts from beyond the arc for an instant 9-3 lead. North Allegheny opened up a 19-6 lead at the end of one quarter and held a 35-14 advantage by intermission. Senior guard Rachel Martindale helped spark the first half surge, scoring 14 of her team-high 20 points in the first 16 minutes.

North Allegheny held a 51-30 lead late in the third quarter before Seneca Valley developed its own hot hand and went on an 8-0 run to trim the margin to 51-38 by early in the fourth period. Senior McKenna Gross paced the Raiders with 18 points, netting 14 in the second half. Senior Gretchen Koken also touched double figures for SV with 10.

While the Raiders crept to within 13 points of NA, it was the closest they would come as the Tigers’ sharpshooters continued to hit their mark for a 67-47 triumph. Senior guard Brynn Serbin spurred on the Tigers with 11-second half points on her way to a 17-point effort. Connecting on five 3-pointers and providing her usual tenacious defense, Serbin was named the Wright Automotive Player of the Game.

Sophomore Lizzy Groetsch was another steady hand for the Tigers with 16 points and poured in four 4-pointers.

North Allegheny remains unbeaten on the season with a 5-0 overall record and 3-0 mark in Section 1-6A. Seneca Valley dips to 5-1 overall and 1-1 in the section. The Lady Tigers return to action on Thursday at the KSA Disney Classic in Orlando, Florida against Townsend Harris (NY) at 9:30 a.m.