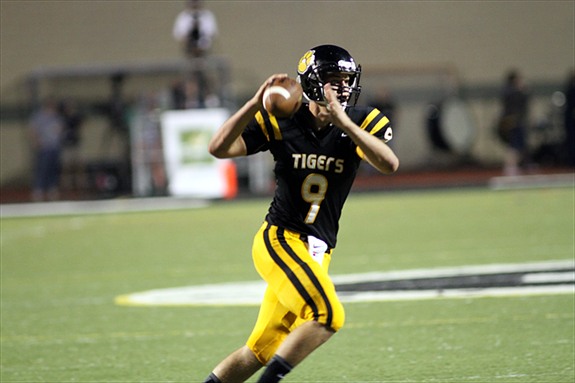 Following a 55-7 drubbing of the Mt. Lebanon Blue Devils last week, North Allegheny hopes to make it two in-a-row to start 2013 when the Tigers host the Fox Chapel Foxes tonight at Newman Stadium in their Northern Eight Conference opener. The Tigers are riding a 17 game winning streak heading into tonight’s game and have won 30 straight against WPIAL opponents. Standing in the Tigers’ way is a Fox Chapel squad that is short on numbers for a Quad-A team, but long on talent at the skill positions.

The Foxes are playing in their second season in the Northern Eight Conference and third season under head coach Eric Ravotti. The former Penn State and Pittsburgh Steelers linebacker will lead the Foxes into Newman Stadium for the first time since North Allegheny handed Fox Chapel a 53-20 defeat in the first round of the 2011 WPIAL playoffs. The starting tailback for the Foxes that season was then-sophomore Nigel Garnett. Now a senior, Garnett remains one of the top ball carriers for a team that will focus on running on the football.

Garnett is one of several athletes, including his twin brother Chad, who will carry the ball for the Foxes out the pistol formation. Along with the Garnett brothers, junior running back Carrington Vaughn can be load to bring down at 6’2’’ and 220 pounds and led Fox Chapel with 62 yards last week in a 49-18 loss to Pine-Richland. The big play threat for the Foxes is all-around player Brandon Mitchell. The 6’6’’ senior is a versatile athlete that will line up in the backfield, at receiver, and even at quarterback. As a receiver, Mitchell can be a match-up problem because of his size and vertical leap. Also on the Fox Chapel Track and Field team, Mitchell took gold at the WPIAL Championships in the 300 meter hurdles and bronze in the 110 meter hurdles.

In the second half of last season, Mitchell saw increased playing time at quarterback but proved to be more of a running threat than a passer. Starting at quarterback earlier in 2012, and when North Allegheny met and defeated the Foxes in week two, 48-7, was Billy Urso. The junior saw the vast majority of snaps at QB in the season opener last week, throwing for 253 yards.  Urso will be the lead candidate to start tonight against North Allegheny with Mitchell being the top recipient of his passes. Senior wide-out Kevin Frankert is another target for Urso in the passing game.

Giving Urso time to pass, or opening holes for the rushing attack, will be a challenge for a Fox Chapel offensive line that returns only one starter and is missing a Division I recruit at tight-end, Chad Wirginis, who suffered a foot injury during an offseason practice.  Wirginis committed to Pitt a month before the mishap and will miss the entire 2013 season with a Lisfranc injury.  With depth an issue, especially at the line of scrimmage, the Tigers hope to command the game at the point of attack on both sides of the ball.

North Allegheny’s defense yielded very little against Mt. Lebanon last week and did not allow a touchdown until the Blue Devils finally found the end zone against the NA reserves late in the contest. After leading the Tigers in tackles last season, junior Layne Skundrich got his nose to the football immediately in 2013 by leading the team in tackles last week with five and will be looking to hunt down the Foxes ball carriers tonight.

Offensively, the Tigers will try to dictate the game with their rushing attack to take the pressure off junior quarterback Jeff Clemens. Making just his first varsity start at QB last week, Clemens was an efficient 8 for 10 for 184 yards and a touchdown through the air. With an impressive debut, Clemens will continue to grow at the position thanks to senior receiver Elijah Zeise who hauled in four passes for 129 yards and a host of different ball carriers that the plowed their way through the Blue Devils last week. Leading the charge was junior Josh Bergman who toted the ball 14 times for 120 yards and two scores. Bergman is supported by talented senior runners Sean Idowu and Andre Sumpter.

While the Tigers are riding a hefty winning streak into tonight’s contest, the Foxes have lost five straight and 11 of their last 12 games dating back to 2011.  North Allegheny will look to extend both streaks tonight with kickoff scheduled for 7:30 pm at Newman Stadium. The game will be broadcast live via the internet on the North Allegheny Sports Network as Randy Gore and Rick Meister have the call. The pre-game show begins at 7:15 pm and features a pre-game chat with Tigers head coach Art Walker.  Click here to listen!