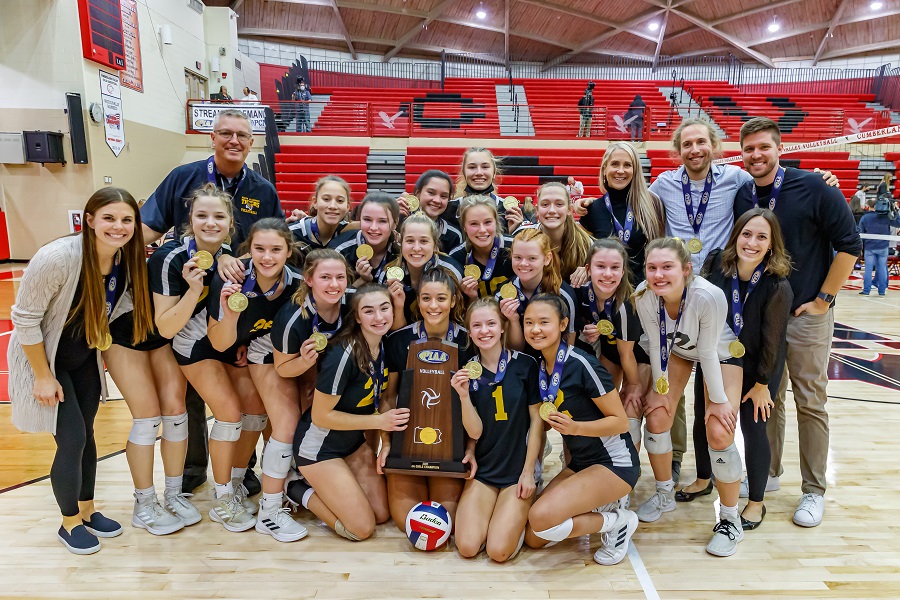 One For The Thumb: Tigers Win Fifth Straight PIAA Title

The North Allegheny girls’ volleyball team won a fifth consecutive PIAA championship, and eighth overall, on Saturday night at Cumberland Valley High School with a 3-1 triumph over Parkland in the Class 4A title tilt. After dropping the first set, 25-23, the Tigers won the next three by scores of 27-25, 25-18 and 25-15. North Allegheny is just the second team in state history to win five or more consecutive PIAA crowns. The state record for consecutive titles is eight in a row set by Norwin from 1976-1983.

Facing a Parkland team that had won three PIAA titles in 2011, 2014 and 2015, the Tigers traded barbs with the Trojans throughout the entirety of the first set. In a tightly contested game, North Allegheny’s largest lead was only 18-15 following the fourth kill of the set by junior Carissa Treser. NA led 23-21 late in the set, however, Parkland scored back-to-back points on kills from Elena Pursell, and two more points on back-to-back kills courtesy of Brynn Dreisbach, to claim a 25-23 win.

In the second set, NA jumped out to a 15-9 lead but Parkland rallied back on the strength of six kills by Pursell to take a 25-24 lead. With the Tigers teetering on the edge of falling behind 2-0 in the match score, NA rattled off three straight points, including an ace by junior Ella Deeter and a block by senior Jadyn Perkins to finish off an exciting 27-25 triumph.

North Allegheny’s win in the second set proved to be the turning point as the Tigers had the Trojans on their heels for the rest of the night and leaped to an 18-9 lead in set three. North Allegheny took command of the net in the third game with momentous blocks provided by Perkins, Treser, Deeter and junior Maddie Fickess. In all, NA produced seven blocks in the set, including the finisher by Perkins, to earn a 25-18 win and hold a 2-1 lead in the match score. 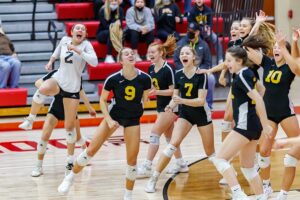 The Tigers celebrate the final point of a 3-1 win and fifth straight PIAA championship.

Set four played out in similar fashion to the third with North Allegheny grabbing a 12-4 advantage in the early going. Parkland, winners of eight consecutive District 11 titles and 10 of the last 11, fought valiantly and trimmed the Tigers lead to 17-15. However, with Deeter serving, North Allegheny went on an 8-0 run to close out a 25-15 set win and 3-1 victory over Parkland.

On several occasions Deeter helped the Tigers roll off a run of points with her serves, and added eight kills, four blocks and an ace to earn Wright Automotive Player of the Match honors.

Offensively, Treser paced the Tigers with 14 kills, followed by Perkins with 10 and junior Mia Tuman with eight. Perkins led the block party with 12 denials, followed by Tuman and Fickess with four each. Tuman facilitated the offense with 39 assists, while junior libero Caroline Curran spearheaded the defense with 25 digs. Sophomore Avery Butcher posted 15 digs, Tuman had 11 and junior Rebecca Pilotta notched 10 digs. Pilotta and Tuman each had an ace, to go along with Deeter’s critical ace in the second set.

With the win, North Allegheny concludes the 2021 season with a 20-1 record, a fourth WPIAL title in five years and a fifth consecutive state championship. Parkland suffered its only loss of the year with a 25-1 record. Congratulations to head coach Russ Hoburg, his entire coaching staff and all of the Lady Tigers for another record-breaking season.