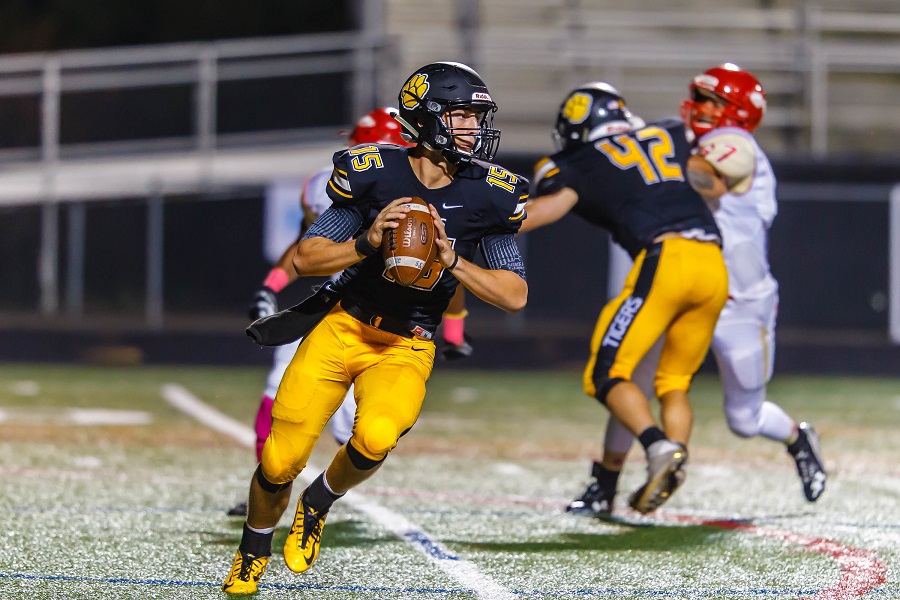 Pine-Richland clinched its sixth WPIAL title game appearance with a 49-25 victory over the North Allegheny Tigers on Friday night at Ambridge High School. The Rams rolled up 665 yards of offense in the WPIAL Class 6A semifinal contest and prevailed predominantly on the passing connection of Phil Jurkovec to Jason DiFrancisis. Jurkovec completed 18 of 20 passes for 432 yards and five touchdowns, with four of his scoring strikes going to DiFrancisis.

The night began with a great display of solidarity between the two schools as the bands for North Allegheny and Pine-Richland unified to play the Star Spangled Banner before the contest.

Once the game commenced, the Pine-Richland offense drove to the North Allegheny 26-yard line before their opening possession stalled. The Tigers quickly scored on their first drive of the game with a 2-yard touchdown run by Turner White for a 7-0 lead with 9:49 to play in the first quarter.  NA quarterback Luke Trueman set up the touchdown with a 72-yard run on the possession.

The big-play Pine-Richland offense responded just 25 seconds later when Jurkovec hit DiFrancisis for a 52-yard touchdown pass to knot the score at 7-7. Pine-Richland added touchdown runs by Jordan Crawford and Jurkovec in the first quarter to take a 21-7 lead.

In the second quarter, North Allegheny mounted an 11-play, 70-yard drive that culminated on a 38-yard touchdown pass by Trueman to running back Ben Maenza who broke numerous tackles on his way to the end zone. The Maenza touchdown reception cut the score to 21-13. The Tigers followed with a two-point conversion pass from Ben Petsche to Sam Humes to trim the deficit to 21-15 with 9:26 remaining in the second quarter.

The Rams marched to the North Allegheny 6-yard line on the ensuing possession but running back Kenny White fumbled and Tigers linebacker Ethan Augustine recovered to thwart the PR scoring threat. North Allegheny converted the turnover into a 32-yard field goal by Dom Falo and the Pine-Richland lead shrunk to 21-18 with 2:34 left before halftime.

Pine-Richland used up only 1:11 on its next drive and scored on a 17-yard connection between Jurkovec and DiFrancisis to give the Rams a 28-18 lead going into halftime.

The Tigers had the football first in the second half but their drive stalled with a turnover on downs at the PR 27-yard line. One play later, Jurkovec heaved a 73-yard touchdown pass to Crawford to increase the Rams advantage to 35-18.

North Allegheny responded with an 11-play, 73-yard drive that was capped on a Trueman 5-yard touchdown pass to fullback Ryan Langdon to bring the score to 35-25, Rams, with 5:21 remaining in the third quarter. Trueman passed for 121 yards and two touchdowns and rushed for 97 yards. Adding a reception for 41 yards on the night, Trueman was selected as the Wright Automotive Player of the Game.

Pine-Richland pulled away over the final 15 minutes of the game with two more touchdown passes from Jurkovec to DiFrancisis from 25-yards and 46-yards out, respectively, for a 49-25 win. DiFrancisis finished with nine receptions for 263 yards and four touchdowns.

Pine-Richland improves to 12-0 on the season and advances to the WPIAL Class 6A championship game for a meeting with the Central Catholic Vikings. North Allegheny’s season ends with an 8-4 record.