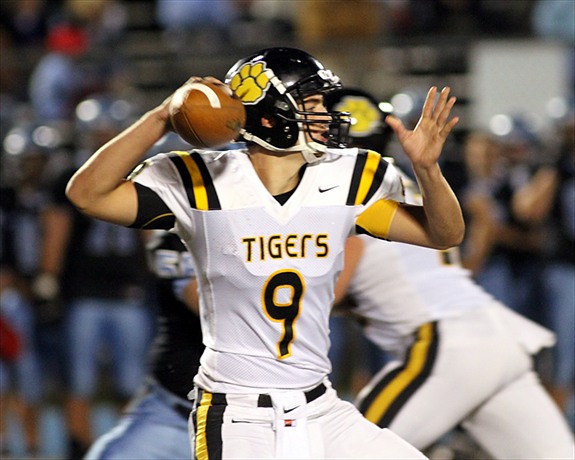 Following their first loss in almost two years, the North Allegheny Tigers (2-1) look to rebound tonight against Northern Eight Conference foe Pine-Richland (2-1) at Newman Stadium. The Tigers are coming off a 20-6 loss last week to Seneca Valley while the Rams bounced Butler last Friday by a 49-19 decision. Currently in third place in the conference, Pine-Richland is vying for their first playoff appearance since 2008.

Regulars in the post-season while in Class AAA under former head coach Clair Altemus, the Rams have fallen on hard times since bumping up to the Quad-A level five years ago. Under new head coach Eric Kasperowicz, the Rams have been rejuvenated this season with an offense that averages 41 points per game. Kasperowicz, a former standout quarterback at North Hills High School in the early 1990’s , has a team filled with youth, but also experience. The key figures in Pine-Richland’s youthful offense are a pair of juniors who were both starters last season as sophomores.  Quarterback Ben DiNucci is a smart decision maker who has thrown for 579 yards and five touchdowns.  Tailback Connor Slomka rushed for 1,000 yards last season and has already amassed 559 yards and eight touchdowns in 2013. Slomka is a two-sport athlete who has already committed to Ohio State University to play lacrosse.

For the Tigers, they’ll hope to slow down Pine-Richland with a hard-nosed defense that’s driven by linebacker Layne Skundrich, the team leader in tackles with 31.  Senior defensive back Elijah Zeise leads NA with three interceptions, including two picks last week against Seneca Valley. Reilly Sullivan is second on the team in tackles with 17.

While the Rams average 41 points per game on offense, the Tigers hope to exploit a Pine-Richland defense that has allowed 27 points per game.  Quarterback Jeff Clemens has passed for 469 yards and four touchdowns, while rushing for another 178 yards and a score. His favorite target is Zeise who’s pulled in 14 passes for 277 yards and a touchdown.  The Tigers leading rusher this season is Josh Bergman with 214 yards on the ground and three scores.  He’s followed by Sean Idowu who’s toted the ball for 128 yards and three touchdowns.

North Allegheny and Pine-Richland will do battle at 7:30 pm tonight from Newman Stadium and the game will be broadcast live via the internet on the North Allegheny Sports Network.  The pre-game show is slated for 7:10 pm as Randy Gore and Rick Meister will have the call.