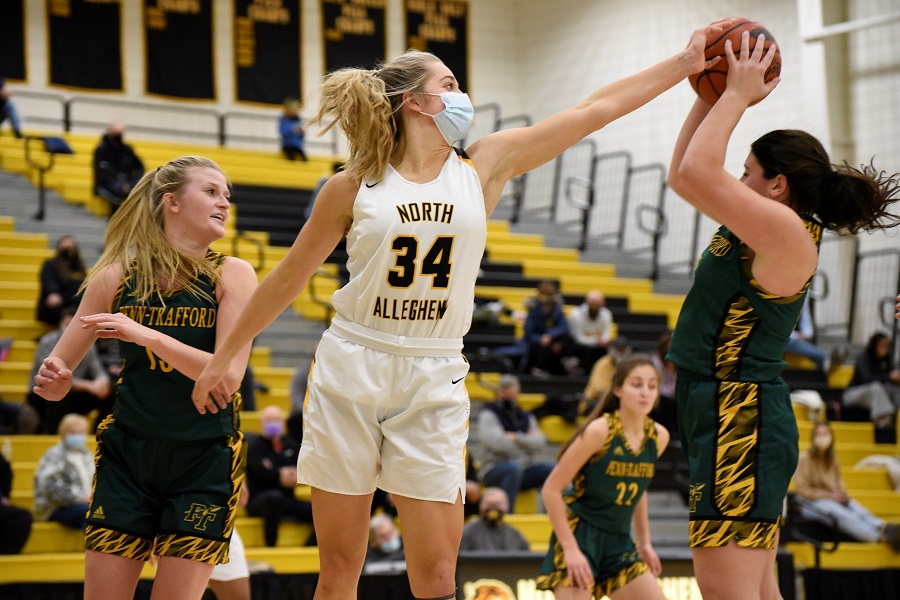 The North Allegheny girls’ basketball team clinched a share of the Section 1-6A title on Friday night with a 50-29 win over Penn-Trafford. The victory was NA’s 30th in a row dating back to last season.

Visiting Penn-Trafford came out strong in the first quarter and used an 8-0 run to take a 12-6 lead. Junior Maura Suman led the early charge with five points on her way to a team-best 16-point effort.

The reigning WPIAL Class 6A champions answered the Warriors’ opening salvo with a 23-2 run to take command of the game. NA led 24-14 at the half and increased the advantage to 36-19 by the end of the third quarter.  Senior guard Lizzy Groetsch paced the attack with a team-high 16 points, including a pair of 3-pointers, and helped NA pull away for the 50-29 win. Groetsch was named the Wright Automotive Player of the Game.

Senior Paige Morningstar also finished in double figures with 12 points. Sophomore Jasmine Timmerson had three blocks and sparked NA’s defense, which turned the tide on Penn-Trafford in the second and third quarters.

North Allegheny improves to 17-0 overall and 12-0 in Section 1-6A action. Penn-Trafford falls to 10-4 overall and 9-4 in the section. The Tigers will have a tough non-section battle at Trinity on Saturday at 1:30 p.m.