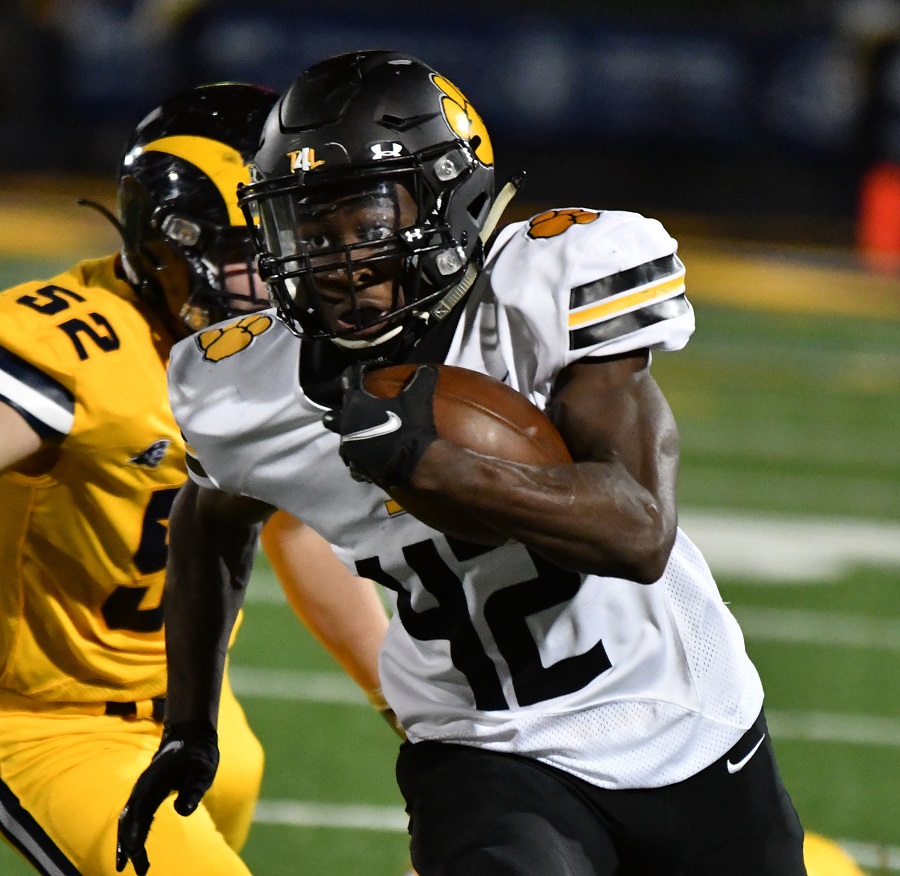 The North Allegheny Tigers dropped a 51-20 road decision at Mt. Lebanon in a Quad County Conference matchup on Friday night. The Tigers rallied from a 21-0 deficit and trimmed the score to 21-14 early in the third quarter. That was as close as NA would come, however, as the Blue Devils pulled away to remain undefeated on the season. The win for Mt. Lebanon also snapped an 11-game losing streak to North Allegheny. It was the Blue Devils’ first win against the Tigers since a 27-7 triumph on Sept. 9, 2005.

The Mt. Lebanon defense forced three turnovers on the night, the first of which came on NA’s opening drive as senior Matt Wertz intercepted a pass and returned it 42 yards to the North Allegheny 27-yard line. Six players later, senior running back Alex Tecza scored on a 1-yard touchdown run to give Mt. Lebanon a 7-0 lead with 7:14 to play in the first quarter.

The Blue Devils added on to their lead when quarterback Joey Daniels found receiver Eli Heidenreich for a 9-yard scoring pass and a 14-0 advantage with 2:37 left in the opening stanza. A 1-yard quarterback sneak by Daniels with 5:11 to go in the second quarter brought the score to 21-0, Blue Devils.

In need of a score, North Allegheny mounted a 54-yard scoring drive that culminated on a 3-yard touchdown run by sophomore Khiryn Boyd on a jet sweep handoff to trim the Mt. Lebanon lead to 21-7 with 1:55 remaining in the half.

The Blue Devils final drive of the first half was short-circuited by the NA defense. With a 1st and 10 at the 45-yard line, a Daniels pass was tipped by a pursuing Jacob Porter on the rush and intercepted by senior defensive back Kyrell Hutcherson to keep the Mt. Lebanon lead at 21-7 at intermission.

The second half began with a three-and-out by the Blue Devils offense, and on the ensuing possession, the Tigers appeared the pull themselves back into the game on a 61-yard touchdown run by senior running back J.R. Burton, trimming to deficit to 21-14 with 9:33 on third quarter clock. Burton rushed for over 100 yards on the ground and was named the Wright Automotive Player of the Game.

Unfortunately for North Allegheny, Mt. Lebanon responded with 20 unanswered points before the end of the third quarter to take a 41-14 lead. Tecza scored on two 1-yard rushing totes and added a 3-yard touchdown catch in the period.

In the fourth quarter, North Allegheny sophomore quarterback Logan Kushner hit senior receiver Dwayne Taylor on a slant for a 13-yard touchdown pass, cutting the score to 41-20 with 8:18 left in regulation.

Daniels tossed a 21-yard scoring strike to Heidenreich and Noah Bhuta connected on a 33-yard field goal in the remaining minutes to bring the final score to 51-20, Mt. Lebanon. The 51 points by the Blue Devils was the most allowed by North Allegheny since a 55-14 loss to Central Catholic on Sept. 9, 2016 at Carnegie Mellon’s Gesling Stadium.

With the loss, North Allegheny dips to 3-3 overall and 1-2 in conference play. Mt. Lebanon maintains its unblemished record at 6-0 overall and 3-0 in the conference. The Tigers will host Norwin next week on Homecoming at Newman Stadium.